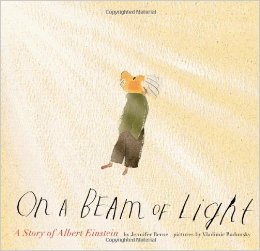 On a Beam Of Light: A Story of Albert Einstein

As I was looking at the dedication of this book, it gave me a start. It read: “To the next Albert Einstein, who is probably a child now.”

And Ms. Berne’s pretty much right on target.

Some boy or girl is probably out there with a questioning, curious mind, that in its very imagining, may some day, like Einstein, come up with the “most revolutionary ideas ever conceived,” just as he did. And those ideas will also, as his did, shape in very unique and profound way, our ideas about this universe of ours.

Ms. Berne invites young readers on a journey of the mind to see what things shaped a young boy named Einstein, and his life “full of curiosity, laughter and science.” And through it all is the creative power of the imagination that fuels it all.

That alone should be a powerful incentive for parents and educators to help develop and encourage that power in children that is so natural, but is often stilted by convention in education, and “business as usual” thinking.

Here’s a quote from Einstein himself, and he’s almost speaking to an audience of young readers when he says:

“The most important thing

is not to stop questioning.

Curiosity has its own reason

There are well quoted stories, though not specifically mentioned here, about how Einstein failed in elementary school, yet it is stated interestingly enough here, that he hardly said a word until he was three years of age. But he did a great deal of looking and wondering, it seems.

Even his parents were a bit concerned. Don’t most of us have those parental yardsticks against which we judge how our young one is doing against the “norm” of someone of similar age? We compare and contrast to see if our child measures up to everyone else of their age…or even exceeds, we silently hope.

A compass brought to Einstein while he is sick in bed, starts the questioning. The little magnetic needle in a case amazes him as it points north:

Suddenly he knew there

were mysteries in the world

Which led to endless questioning in school; so much so that he was labeled a “disruption to his class,” and his teachers commented he would “never amount to anything unless he learned to behave like all the other students.”

One day, a ride on a bicycle finds him contemplating a single beam of light “spreading from the sun to the earth.” He wonders what it might be like to ride that beam, and his mind is off and running with more questioning. The wondering will lie dormant for awhile, though never far off.

Vladimir Radunsky’s creamy backgrounded pages make Einstein’s life and light theory, as human and accessible as his riding a bicycle, eating an ice cream cone or sailing; all of which he is seen doing. And, of course, that wild and white mane of tousled hair is easily identifiable as Einstein ages.

Light and sound, heat and magnetism and gravity; the “invisible force that pulls us downward toward our planet and keeps the moon from floating away into outer space,”  Albert Einstein finds himself pulled into these fields with ever greater intensity.

And, he discovers a love of numbers as if they are the code for thinking things out, and how they work.

After college he wanted to teach, yet couldn’t find a job. It eventually leads to a government job where he works with other’s ideas and inventions. He has plenty of time to “think and wonder.”

Nothing is too small not to catch his attention of curious questioning…how a lump of sugar dissolves in his tea… how the smoke from his pipe disappears into….what?

Slowly, he comes to the theory of the teeny, tiny atom that comprises everything we see.

They are so small, yet moving. And his theory, while initially doubted, is proven by his figuring:

Everything in the world is made of

My favorite picture, and one kids may like, is that of Einstein observing in a bubble caption, the words: “Even this book is made of atoms!

From his ideas sent to science magazines that printed his theories that eventually reached scientists and professors, he is literally begged to come work with them….and he does get that teaching job.

Einstein now has plenty of time to ponder, posit, and suppose about the “size and shape of the universe,” and lots of other things, as he sails in a little sailboat.

And to my great surprise, in the summer of 1939, he rented a little cottage, sailing that very boat quite close to where I live, in a place called Horseshoe Cove, on Nassau Point, on Cutchogue, Long Island.

I think perhaps people even complained a bit about the violin playing that helped him, when a solution to a problem rolled around in his head, refusing to be solved:

He said it helped him think better.

Kids may get a kick out of Einstein’s so-called “thinking clothes” that were comprised of a “comfy, old saggy-baggy

sweaters and pants. And shoes without socks.”

There is still something quite childlike in a genius who revels going sockless because he is grown, and can do as he pleases….at least as far as socks go.

Young readers can just imagine this genius theorist, wandering the town where he lived, sometimes licking an ice cream cone.

But, he kept coming back to that beam of light that he observed long ago.

Albert figured out that no person,

no thing, could ever zoom through

space as fast as a beam of light.

It may have sounded quite crazy at the time, yet scientists have proved it to be true, in fact.

So, when young readers wonder where imagining can lead, along with thinking and questioning, it may just lead as it did with Einstein, to ideas that propel spaceships and satellites and who knows what else?

And the best thing of all may be that young readers may find that his work, while astounding and amazing for its time, only opened the door to so many more questions still to be answered…..maybe, as the dedication to this book suggests, by someone reading Jennifer Berne’s very book, called “On a Beam of Light.”

We need great picture books on the sciences, and on people of achievement in that field. They just may spark ideas to get kids thinking about what is possible with the power of the imagination as the engine that supplies the drive.

And here’s an article from a Long Island paper about Einstein’s “Summer of 1939” on the East End.