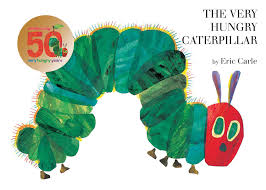 Read the words of one such special author and you will see what I mean. Eric Carle, winner of the Laura Ingalls Wilder Award and many other accolades for his body of work for young readers, hits the nail on the proverbial head with these quotes:

These are welcoming words from an author who has influenced, comforted, taught and inspired generations of young readers with his picture books.

His idea for The Very Hungry Caterpillar  was, in his words, pure coincidence. Many creative ideas for a book emerge fully formed from an experience of the author. In this case it was a hole puncher used on a sheaf of papers evoking a  “bookworm” morphing to “green worm” and finally, to “caterpillar.”

Eric Carle recently passed on May 23rd 2021 and these sentiments express the hopes of readers everywhere who loved his picture books:

In the light of the moon,

holding on to a good star,

a painter of rainbows

is now traveling across the night sky.

The Very Hungry Caterpillar is perhaps one of the most vivid examples of Eric Carle’s contribution to young readers. Written in 1969, with more than 55 million copies sold, this classic children’s read has been translated into 45 languages! The metamorphosis of the caterpillar, as he eats his way through a variety of food groups, including sausages, ice cream, chocolate cake, pickles and cupcakes, ends with the ensuing emergence of the butterfly from its cocoon. It seems to mirror childhood and its process of growth and change.

The key ingredient in the story, I always felt, was the food—the fuel that feeds the growth. And, just as food nourishes and supports a young, growing body, so too it also needs the constant nourishment of books to feed the thirsty, inquisitive child with a constant rich and varied diet of the mind.

Eric Carle has been a wonderful contributor to that diet for generations of young readers and eager young minds. The Very Hungry Caterpillar has been, for many young readers, but one of those meals.

In fact, it may be a seamless metaphor for his preceding quotes. Life, in all its varied forms, human or insect, is inevitably faced with the certainty of change. Things change, we change, life changes, but seeded deeply within that change is the opportunity for something exciting to happen—growth.

This past year and the rapidity of change that the pandemic has brought to the lives of children on every continent and country is proof that change is a constant and that how a child processes and negotiates it is most important. What I have always believed is that picture books, at their best, can not only echo what is going on in the inner lives of children, but educate and entertain at the same time.

That is what Eric Carle did.

As previously mentioned, in 2003 Eric Carle received the Laura Ingalls Wilder Award, first given in 1954, and named for its first recipient. Its name has since has been changed to the Children’s Literature Legacy Award. We won’t go down that rabbit hole, as I have made my feelings known about the name change in previous blogs.

Given by a division of the American Library Association, it is given to an author or illustrator whose books, published in the United States, have, over the years, made a “substantial” and “lasting” contribution to literature for children. He was the author of some seventy books.

One selection committee member summed it up best: “Eric Carle’s visual observation of the natural world encourages the imagination and often mirrors the larger changes in a young child’s development and experience.”

Eric Carle passed at his summer studio in Northampton, Massachusetts at the age of 91. He did not start writing children’s books until he was forty.

Eric Carles’s books, reflected back to a child through the mirror of nature, is the certainty of change, but it need not be fearful; on the contrary, it can be beautiful, rewarding, and exciting.

Lessons learned by a child through a book can be simple, yet life-affirming. In Carle’s childhood world, there is an exciting period of play, observation, and discovery leading to growth and many life lessons.

Speaking of life lessons, there was an amazing initiative several years ago, focusing on the goal of helping children and families learn about healthy eating habits. The Alliance for a Healthier Generation and the American Academy of Pediatrics,  joined forces with We Give Books, a digital initiative of Pearson, parent company of Penguin Books, publisher of The Very Hungry Caterpillar. A specially created free copy of The Very Hungry Caterpillar  was offered at pediatric offices across the U.S. to highlight the importance of the issue of healthy eating as a way of reversing the trend of childhood obesity.

Knowing when one is satisfied and full is a lesson the caterpillar learns in Eric Carle’s book as he winds up with a whale of a stomachache! As Mr. Carle states, “. . . I hope The Very Hungry Caterpillar will be a happy reminder for children to grow healthy and spread their wings like the butterfly in my book.”

Today, the fast-forward pace of our culture seems, to the casual observer, to be compressing childhood into a smaller window of time. Maybe authors like Eric Carle have, in their works, a gentle reminder to slow it down a bit.

And here’s a radical thought: why not let kids have a break from over scheduled free time, so they have a chance to, dare I whisper it…get BORED! Sometimes that boredom gives way to dreaming, pretending and imagining.

And isn’t THAT supposed to be a big part of childhood…or at least it was.

Accomplishing anything of worth takes the investment of time, whether it’s reading a book or growing up. To me, the two have always been inextricably linked. One feeds and informs the other.

Eric Carle recognized that and allowed his readers to use nature as a classroom and teacher. Much of this early discovery and fascination was fueled early in life by forays with his father overturning rocks and peering to see what lay beneath.

In The Very Hungry Caterpillar, he reflects the fascinating, not to be rushed, growth curve of childhood the caterpillar follows. It is filled with observation and is buoyed up in the process by a sense of security—the world is a good and beautiful place. Children are anything but static. They continually grow, adapt to new situations, and, in the process, become resilient and strong. And they are fed all through this process.

Reading The Very Hungry Caterpillar again and again and again can be comforting and captivating. The habit of reading aloud with a child allows a deeper, richer enjoyment of the experience of childhood, enhanced by works of authors such as Eric Carle and other icons of children’s literature that we have lost recently, such as Beverly Cleary and Tomie dePaola.

Their work resonated deeply with children and provided education laughter and relaxation in an ever more undefined world where children long for structure, safety, comfort and above all wonder and imagination that feeds young souls in their journey to the adult world.

They contributed to the journey and made it come alive with fresh perspectives of joy.

I firmly believe these classics for young readers reinforce and add greatly to that precious, never to be repeated time. Reading continues to feed and strengthen a child in much the same way as food on a dinner table. I deeply believe we can never underestimate the central role of children’s books in the formation of a life. The lifelong habit of reading, begun early in life, can instruct, comfort, stretch the imagination, and provide a companionship of sorts that a child will return to often.

“Early and often” should be the mantra for reading these classics to our children, grandchildren, or to any youngster in search of a good read.

You know how I’m so sure of this?

I still like reading picture books myself—always have; always will.

Your lasting children’s literary legacies are writ large in the hearts of the young and the young at heart.

They, like you three, will stand the test of time.

Classics, both human and literary are timeless, thank God!