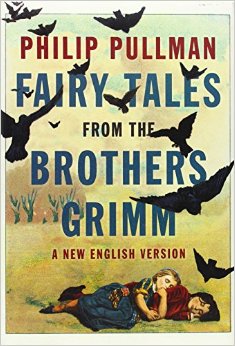 Fairy Tales From the Brothers Grimm: A New English Version

A picture book author friend of mine put me on to this title. I’m pretty excited to share it with all of you parents, grands and just about any one that reads to children.

Just a thumbnail sketch of who the author is might read that Mr. Pullman’s previous “Dark Materials” is a three book trilogy.

The first book was made into a movie in 2007 called “The Golden Compass”with Nicole Kidman and Daniel Craig. Did not do so wonderfully well at the box office here, and, in an article I read as I was writing this piece, indicated the less than stellar box office performance was due in part to a reaction from some people’s concerns that it might be anti-Christian in tone or promote atheism to children. That said, here is his book on fairy tales that is great.

Did you know that we celebrated recently the 200th anniversary, of the first volume publishing of Jacob and Wilhelm Grimm’s book called “Children’s and Household Tales?” That event provided the impetus for this book, in fact.

Our imaginations have reveled in these tales for two hundred years. And here, Mr. Pullman takes 50 of his favorites and retells them. One of its highlights are the “Commentaries” he includes at the end of each tale. These are small gems that provide a window into the tales’ sources, their various forms over the years and why their appeal has lasted. Have my own ideas on that topic, too. Fairy tales are not just entertaining. They allow children to confront unconscious fears they cannot name, but only imagine.

Witness the story of “Hansel and Gretel.” Here the fear might be called abandonment or a loss of one’s parents. The tales are both entertaining AND therapeutic in a way!

Mr. Hoffman has included the popular favorites such as “Cinderella”, “Hansel and Gretel”, “Rumpelstiltskin”and “Rapunzel.”

The American poet, James Merrill is quoted in the introduction to this book. He discusses two characteristics of the fairy tale: the “serene anonymous voice”that relates the narrative and the collection of stock characters that inhabit the tales.

Perhaps you might try a bit of an experiment with your young readers. I am planning to do the same with my story time 3-5 year olds. Ask them to “imagine” the story! Ask them to picture the setting, characters and action in their minds. Perhaps start off with the shorter tales and move on from there.

I’m convinced young ones need small, continual doses of this kind of reading. Their world is literal and very visual. The technology that floods their days, while admittedly amazing, and a continuing part of the world they will grow up in, may not allow the time or leisure to build the imaginative mind nor their attention span.

This book, I believe, is a way for your child to build BOTH.

And there is an extra bonus here. You, too can be re-enchanted as you read some favorites from your own childhood and discover some new ones from the brothers Grimm.

Do you remember the phrase “spinning a yarn” that refers to telling a story? Well, what miller’s daughter, do you remember, spun straw into gold and was backed into a bargain by a tiny man with a silly name?

Did you know that having a mate that could spin was a much prized skill set in a wife in days gone by? And, if she could spin AND produce gold, so much the better. So, the king in “Rumpelstiltskin”  must have thought he was receiving a very worthy prize by marrying the miller’s daughter, no? Bet HE couldn’t spin worth a dime! Found these pieces of info in the “Commentaries” following each tale.

Spin your own straw into gold by reading the pages of this wonderful book to young readers on these rainy spring afternoons and evenings. Transport both of you to a compelling and pretty complete collection of Jacob and Wilhelm’s tales.