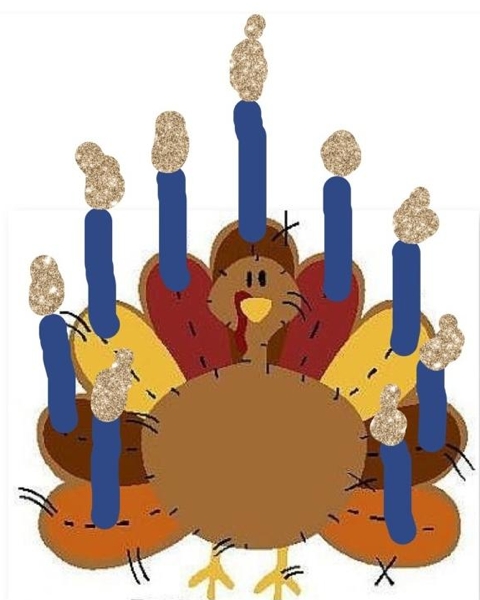 Celebrate Thanksgiving and Hanukkah Together!

I read an article recently that appeared in The Huffington Post and it appears for those of you who may not realize it, for the first time since 1888, Thanksgiving AND the first day of the eight-day Jewish festival of Hanukkah will converge on the same date. That is November 28 to be exact. According to one calculation mentioned, this convergence will not reoccur for well, oh another 77,798 years! The article goes on to state this is a “once-in-an-eternity opportunity to simultaneously celebrate two favorite holidays.” The term, “Thanksgivukkah” was actually trademarked last year by Dana Gitell of Boston who thought it up as she drove to her marketing job at an elder care agency. Supposedly she even created a Facebook page and printed T- shirts that say “Happy Thanksgivukkah”.

Cooks are stirring their pots concocting synergistic signature dishes for the holiday such as pumpkin and sweet potato latkes. The synergy extends not just to food convergence, but to the heart of what both holidays celebrate and that is religious freedom.

Think of the linkage between the two holidays: Thanksgiving marks the impossibly difficult trek of a group of Pilgrims to escape religious persecution as they journey to a new land. They felt that Divine Providence is guiding their steps into the wilderness of a harsh and unknown place. Hanukkah celebrates the Jewish fight against oppression in their land. The Maccabees’ miracle of the small amount of oil used to supposedly burn one night at the rededicated Temple in Jerusalem astonishingly continues burning for eight!

So to help young readers enjoy both holidays, over the next two weeks The Snuggery will be featuring a selection of picture books and others for young readers that you can use to mark the dovetailing of these two wonderful holidays!