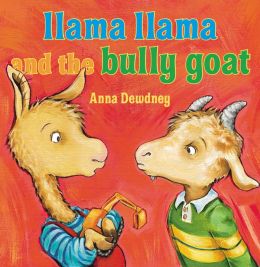 Llama Llama and the Bully Goat

Every time you pick up the newspaper lately there seems to be an article on “bullying”. So much so that in some states bullying is required by law to be brought to the attention of teachers and guidance counselors so that it may be addressed. Question: How do we speak to the youngest of students about this issue and how do we as parents know when teasing which has been around since kids have been in school, crosses a line into bullying? One rule of thumb as regards bullying appears to be a pervasive behavior of one student towards another that is increasingly hostile and demeaning and goes on for a substantial period of time. How do you explain that to a five-year-old child?

One simple place to start is with a picture book since they have been very effectively used not just for entertainment for young readers but also for education!

Enter Anna Dewdney and her terrifically successful and readable “Llama Llama” series. For our purposes and subject up for discussion, “Llama Llama and the Bully Goat” fits the bill.

Llama Llama and classmates have gathered for circle time at school and everyone is joining in the fun: Kitty, Rhino, Calf, Nelly Gnu and the crew are all singing away, mooing, bellowing, baaing and braying. Gilroy Goat is the only fly in the ointment or songfest. Instead of singing along, he just points and bleats. He laughs at everything and everyone and even crosses the no no line into not-nice name-calling. Gilroy is called on his ungracious behavior by the teacher – and quick!

In succession in the play yard, sand is kicked, dirt thrown, pushing starts and Gilroy winds up tossing toys and sticks. Whoa Nelly, wait just a minute that is, and it might have been voiced by Ms. Gnu who is termed “Smelly” by the bully goat!

But these young animals have a strategy for dealing with the goat: they call him on it straightaway, then walkaway and tell someone.  Good plan “kids”! Gilroy is in for a lengthy time-out from teacher and then a reentry into the group if he can “play nice”.  And seems Gilroy can be a goat who gets it for Llama and “Gilly” wave goodbye to each other at the end of the day as friends.

Perhaps each “bully goat” your child meets will not be as pliant as Gilroy, but this is a great book that within the story has some simple strategies for dealing with the problem of a bully. And the best part of the book is it offers a way for the outsider to become an insider and that is especially important in the school years when “the group” becomes all-important. And, maybe even after, if we’re honest.

Gilroy and Llama may not be fast friends forever, but they learned as we all do that sometimes life offers second chances and is lived a day at a time. Well done, Gilroy and Llama Llama too, of course!