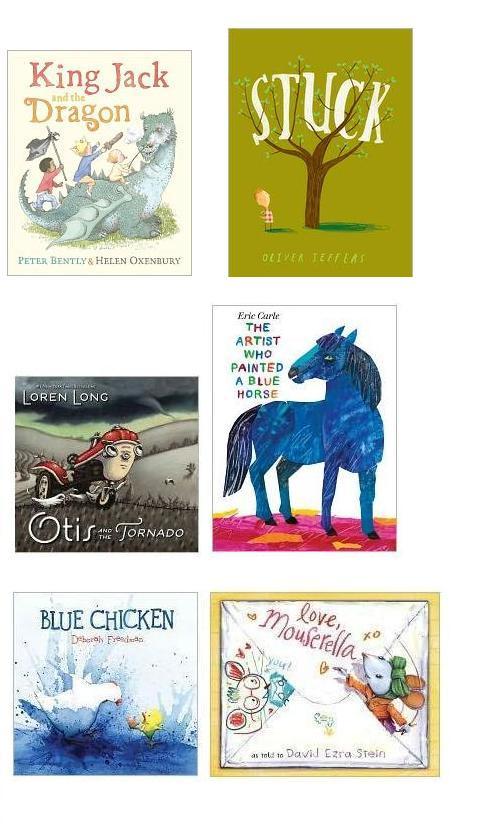 Celebrating the Art of the Picture Book

A Spotlight on Picture Books

With recent articles causing a bit of a firestorm in the Young Readers’ world with the genre of picture books being touted as almost obsolete, unnecessary and about to be supplanted by chapter books, Penguin Young Readers Group has chosen to react to this perception in a very positive way.

They have issued a boxed grouping of art from six artistically and narratively fresh covers of   these newly issued picture books.

Penguin Young Readers, I’m happy to say through this initiative put their dollars behind the belief that the legacy and future of the picture book is alive, well and intact. Well done, Young Readers Group!

The six new picture books are as follows:

The Artist Who Painted A Blue Horse – Eric Carle

King Jack and the Dragon – Peter Bentley and Helen Oxenbury

Otis and the Tornado – Loren Long

Any or all are certainly worthy as they present a collection of voices and views of the childhood experience as seen from a variety of perspectives. From a traditionally captivating tale of make–believe where children are heroes, to a young boy taking determination and problem solving to new heights battling a persnickety kite stuck in a tree, to an all but obsolete tractor proving his mettle, (couldn’t resist) when confronted by two forces of nature – an intimidating bull and a tornado, threatening farm and friends.

I’ve chosen three of the six to blog about, but please don’t let that stop you from enjoying all six. There is a child out there for whom one or all is a perfect match. So please try and put them together with whatever voice you feel speaks to the heart of your favorite young reader.

With the recent passing of Steven Jobs, people everywhere are reflecting on one man’s creative spark that influenced how a generation accessed music, information and a host of other things.  And the next thought is probably something like this. Did I ever have that same enthusiasm, wonder and creative output?

The answer is YES you sure did – as a child. But somehow as we got older, it was calloused over as we were buffeted by life and we lost touch with it, thinking it immature to display.

Steve Jobs didn’t or at the very least, he clung to large parts of that wonder of discovery.

Here’s a quote from a Commencement Speech he gave at Stanford:

“Don’t let the noise of others’ opinions drown out your

own inner voice. And most important have the courage

to follow your heart and intuition. They already know

what you want to become.”

What a great insight if linked to the use of picture books as the fuel for a child’s growing imagination, feeding and nourishing it through the richness of experience explored through picture books.

In buying into the premise of picture books as childish and not child like (there is a difference), and the ensuing headlong rush to the chapter book, aren’t we contributing to a movement towards compressing childhood into a smaller and smaller span of time?

And hey, in our quieter moments don’t we as parents sometimes feel we left a tiny bit of our best selves there? These might have been the parts that dared, dreamt, did, frisked, frolicked and, yes even cavorted!

Here’s to the crazy ones, the misfits, the rebels, the troublemakers,

the round peg in the square holes….the ones who see things differ-

ently – they’re not fond of rules…you can quote them, disagree with

them, glorify or vilify them, but the only thing you can’t do is ignore

them because they change things…they push the human race forward,

and while some may see them as the crazy ones, we see genius, because

the ones who do.

These six books with six individual and unique voices and art give the reader free rein to rejoice, revel, examine and explore the simple complexity of childhood. Here then are but three of the individual voices to be heard in this “Spotlight on Picture Books”.

King Jack and the Dragon

Children love adventures. But the favorite among these usually involves the building of a hideaway of some sort and even better, one to be defended against fierce dragons and terrible beasts! It can involve a collection of quilts and blankets flung over chairs, makeshift cardboard boxes or in the case of King Jack and his faithful companions, Zack and Caspar, a cobbled together outdoor lean to, their very own castle to be defended at all costs!

This trio with great brio chases fierce beasts in daylight, but as night descends and three brave knights dwindle to one, can young King Jack withstand the castle assault solo?

This is a book with make-believe all of us and each of us can relate to with sweet illustrations of this brave band that completes the effect.

Get a box, teepee, tree house or several chairs with blankets and fashion your own defendable castle. Next, with child and flashlight in hand enjoy a trip through the remembered castles of your own childhood. I did and it’s worth the trip. Drawbridge up please; there’s a dragon on the premises!

Floyd has a problem. His red kite is stuck in a tree.

In my younger days, the problem was of a similar nature and always involved the same article which was a small, new, bubblegum pink Spalding rubber ball or as we called it, a “Spaldeen”.  The problem was always the same. We were in the middle of a ferocious stick ball game and the ball rolled into the SEWER. What to do? Play ceased until the “Spaldeen” could be freed from its murky and watery prison. Heavy, immoveable iron grates barred the way so all manner of ingenious maneuvers were implemented by the collective team so play could commence. Wire coat hangers, straightened with a cup shape at the end was our mainstay for rescue. The broom handle of the stickball bat with the wire hanger attached definitely extended our reach to rescue.

In Stuck Floyd is no less ingenious and DETERMINED using everything but the kitchen sink to rescue his kite.

Problems ensue in quick succession, as each article thrown into the tree not only does not loosen the kite, but sticks in the branches as well. Starting with his shoe, a ladder and Mitch the cat, all Floyd’s considerable ingenuity and energy is used towards propelling articles and animals into the tree to dislodge the previously stuck!

No wire coat hanger will do here but bus, boat, car, rhinoceros, lighthouse, whale and even one orange orangutan are not outside the realm of Floyd’s imaginative resources tossed upward to GET BACK THAT KITE. Mr. Jeffers in Stuck has playfully and perfectly captured the single-mindedness of a child on a mission! If you’re wondering what happened to the milkman, please check out Stuck. He’s up there!

Otis and the Tornado

Can you fall in love with a tractor? Well, I’m sure John Deere enthusiasts will nod wildly with approval, but so too have tons of picture book enthusiasts who have fallen for a small, red and cream tractor named Otis.

He is kind, friendly to all, hardworking and here again with his trademark putt puff putted chuff, a wonderful barnyard adventure involving risk and rescue cannot be far off.

Did I say friend to all? Perhaps I misspoke, for friendships are supposed to go both ways, but that seems definitely not to be the case here.

In Bambi, a famous quote reads: “Man has entered the forest” meaning the dynamic has changed for the worse. Here it should read: “The BULL has entered the barnyard” and things will never be the same or will they?

As Otis’ offer of a shiny red apple is met with snorting, snarling and butting, Otis learns to steer (sorry) clear of this force of nature but can he?

Another force of nature intervenes, via the sudden appearance of a tornado descending on the farm as all flee for their lives – with one exception.

Yup, in the mad dash for safety, someone forgot about el toro! Will he be left to his own devices to seek shelter in a locked bullpen – alone? You can safely bet your tractor named Otis he won’t!

Loren Long has created in Otis an enduringly loveable machine who exhibits human qualities of love, friendship and bravery as fully realized as the beloved steam shovel, Mary Anne, in the classic Mike Mulligan’s Steam Shovel. Both will never be obsolete, but endure in the longevity and long legacy of the picture book.

The Artist Who Painted A Blue Horse

Art is an extraordinarily powerful medium; in many ways no less so than the written word. These two in combination are the reason why I believe so strongly in the strength and power of the picture book and why its legacy is long, enduring and beautiful in what it leaves behind and generates in the heart and mind of a child for it continually, when fed, is the most imaginative of places.

Sometimes the text of a picture book is brief but still powerful in what is left unsaid for art alone with the simplicity generated in Eric Carle’s latest book can stand alone with minimal text and still suffice, for the child can draw his or her own inference.

In Carle’s, The Artist Who Painted a Blue Horse, his inspiration for the book may have been drawn from Franz Marc, a German artist born in 1880 who HIS time dared paint animals in bright and nontraditional color palettes. A sample of Marc’s highly stylized work is seen in the end page of Eric Carle’s book. Marc’s painting is entitled Blue Horse I and it is beautiful.

Eric Carle has taken this kernel of an idea patterned in Marc’s bold expressiveness and fashioned a picture book which affirms the budding artist’s vision without the necessity or intrusion of the realism of it.

You too may be intrigued by Carle’s mention of the sketchbook Franz Marc, killed in World War I left behind. In it were contained 36 pencil drawings he was thinking of transforming into oil paintings.  Who knows what could have evolved from those sketches!

But his legacy thankfully lives on in Eric Carle’s newest book. For children, as they turn the pages of this book, will see in the bright incongruous colors of red crocodiles, yellow cows, pink rabbits, purple foxes, BLACK polar bears and a polka-dotted donkey among other renderings, the nod to their own creative imaginings.

What parent has not looked curiously at the drawings of their offspring and wondered how their imaginations concoct a world drawn as THEY see it with an eye toward the truth of their own perceptions. Eric Carle’s book says imagine away and don’t be afraid to color “outside the lines” as it were.

In his wisdom he has given the nod of assent to each child’s creative vision in “The Artist Who Painted A Blue Horse and it is very affirming.

Please take great delight along with a child in this picture book and its simple but very eloquent championing of the uniquely creative in every child.

I was just thinking that the famous Peabody Award winning Fred Roger’s of the iconic children’s television series, Mr. Roger’s Neighborhood, saw the same need and gave his own tip of the hat to it in HIS unique creation of the character called PURPLE PANDA!