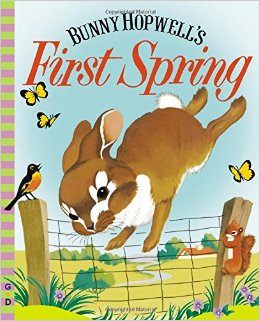 If you’ve missed picture books re-imagined in the new G and D Vintage “treasure trove of beautifully illustrated books”, then you and your young reader are missing something wonderful for both of you.

Perhaps mom, dad, and grandparents still remember them fondly from their original publication from the Wonder Book line, originally published in the 40’s, 50’s and 60’s.

Well, they are here and ready to be shared with a new generation of readers, namely your grandchildren, who have not had the pleasure of reading and seeing the great visuals and art that accompanied them.

Here, in Bunny Hopwell’s First Spring,  published initially in 1954, it was written by Jean Fritz, winner of the Laura Ingalls Wilder Award for her career contribution to American children’s literature, a Newbery Honor for Homesick, and a slew of non-fiction historical novels, such as What’s the Big Idea, Ben Franklin?, Then What Happened, Paul Revere? and Shh! We’re Writing the Constitution.

In this early foray into the world of picture books, Jean’s Bunny Hopwell is born during the winter, yet hears all about the loveliness of Spring. He knows nothing but snow and freezing temps. Spring is an elusive idea in his head.

Come to think it, Spring has been pretty elusive in making a protracted and late appearance this year, what with frost warnings well into May.

Will Spring ever come? Bunny Hopwell and yours truly, and dare I venture a guess, a ton of other people are longing to hear those robins singing on top of newly mowed grass with that smell like no other being ready to be deeply inhaled.

Bunny Hopwell is getting just a tad impatient for the arrival of the “something” called Spring that he has never experienced. Everyone from squirrels to chipmunks and sparrows are chattering about its grand arrival. Bunny Hopwell’s patience is at an end as he says:

no longer. He flapped his ears. He

stamped his feet. “Who is Spring.”

Mother Hopwell takes him on her lap and lets him in on the qualities of Spring as he awaits its debut for the first time in his young life. She describes its beauty and warmth that “will push up from the ground” and “come in the air.” But those are just intangibles to an impatient bunny.

Waiting! It’s the bane of the young that must be endured, as Bunny Hopwell spends his time practicing high jumps to while away the wait. How can you jump over a garden fence without that learning curve, right?

But rather than wait, he’s going out to meet Spring. Does he?

But, he does meet and experience its harbingers, first hand… in bears coming out of hibernation, violets near brooks, fat red breasted robins and soft, fresh, green grass that he nestles and noses into.

Bunny Hopwell finds himself “happier and hoppier” than ever. Spring, he finds, is also a feeling, as he discovers all the things filling his senses that put a spring in his step.

Firsts, be they for bunnies or young ones, are always full of discovery and fun, as your young reader will discover for the first time, and you may rediscover, right alongside a bunny you may recall named Bunny Hopwell.

As good a definition as any other, Bunny Hopwell.

And here to get you in the mood, along with Bunny Hopwell, are a group from the 60’s called “The Rascals,” singing, “It’s a Beautiful Morning.” It, too, is vintage classic!