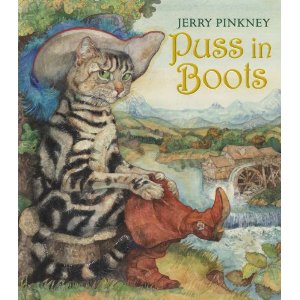 Fairy tales can come true, it can happen to you.

If you’re young at heart.

If you’re young at heart.

You can go to extremes with impossible schemes.

You can laugh when you dreams fall apart at the seams.

And life gets more exciting with each passing day.

And love is either in your heart or on its way.

Of course, it also helps if you’ve a wily, whiskery, white-and-black silver-tabby British shorthair cat as your confidante and advocate in Jerry Pinkney’s glorious reimagining of Puss in Boots. Mr. Pinkney has taken this classic fairy tale and plunked its setting, first published by Charles Perrault in 1697 and the British edition of 1729, in the French countryside of the timing of the story’s English edition. Mr. Pinkney has done his homework – and it shows. The illustrations are filled with a lush richness of detail gleaned from, as he states in the “A Note from the Artist,” his “search for visual reference on France of that time period, its costumes, mills, castles, horse-drawn coaches, and landscapes. His imaginative inventiveness used these, and poring over 20 odd illustrated versions of the story, as a mere jumping off spot for his natural storytelling abilities and artistic boldness to take over. The result, for those who’ve not read Puss in Boots, and even for those who have, is the wonder of seeing it with a freshness of vision. It is an excellent edition to savor and slowly turn the pages in wonder as Pinkney’s craft unfolds delightfully before the reader’s eyes and ears. No library should be without this rich remake of this classic tale.

And speaking of tales or should I say tails, the one belonging to this canny cat with swagger and a pair of boots has enough of the “right stuff” to vault his owner, Benjamin, into a castle and the title of the Count of Carabas! Huh?

Well, how else could poor Benjamin make his way in life when his father, a miller, leaves the mill, to one son, a donkey to another, and, you guessed it, a mere cat to poor Benjamin. Ah, but this puss is no mere cat. No sir. With a staggering inventiveness and quick seat-of-pants decision-making, this cat can wheedle his way into the graces of the king of the realm in a wink. Mind you, he’s starting off with a pair of boots and a sack with a drawstring.  It happens to come in mighty handy, though, for nabbing a tasty rabbit if you’re out to impress the ruler with a kingly meal.

It’s an easy jump from there to partridge, pheasant and fish – all says Puss in Boots, from the vast land holdings of his master, the Count of Carabas. WHO? It’s Benjamin of course.

How is he going to pull this off? Rewarded with gold coins to be sent to the Count and a gloriously plumed hat for Puss, his next problem is how to produce these vast land holdings and a castle for the imaginary Count. Why, by outwitting a sorcerer of course.  How he parlays his leather boots and sack into a wedding for Benjamin er The Count of Carabas, to the king’s daughter is a fanciful tale I will not ruin for you. Suffice to say that if the old adage “every doggie has his day”, Jerry Pinkney’s “Puss in Boots” is one puss who arrives in the “catbird seat” from the get go and takes you along for a dizzying, but ultimately very satisfying ride to the castle of the Count of Carabas and a wedding. How, you say? He’s a VERY special cat that you and your young reader will be eager to get to know and revisit – often.