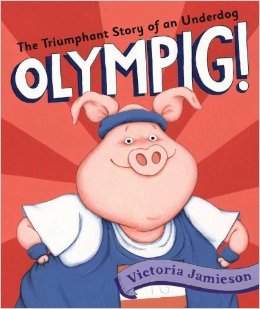 Olympig!: The Triumphant Story of an Underdog!

After Super Bowl 50, there were floods of sports’ analysts, as well as fans, commenting in the media, concerning the post game interview conduct of losing quarterback, Carolina Panthers, Cam Newton.

Never having played on a professional sports team that reaches the zenith of competing for football’s ultimate victory, and with it, the coveted Lombardi Trophy, it’s hard for me to gauge the depth of Cam Newton’s feelings at the loss of it.

But, I do think there were many young readers watching that interview, and I have to wonder what they took away from it.

Let’s face it; today many of the role models for youth are primarily rock stars and sports figures.

Vince Lombardi, famed football coach, for whom the Super Bowl trophy is named, is credited with the famous saying:

Winning isn’t everything; it’s the only

Sounds like Cam Newton’s less than stellar behavior and sulky demeanor was then justified? Maybe not. Because what Coach Lombardi meant by that quote, he later clarified, was the following: that each and every time that you compete, you give 100% effort each and every time you do. And that if you do that, then there is nothing that you need be ashamed of, as you exit the field.

Maybe someone should have reminded Cam Newton of that Lombardi philosophy after his interview, so he could have amended his demeanor just a bit.

I found a picture book by Victoria Jamieson that you may want to read to young competitors before they next stroll out on a field, dive into a swim lane, or skate onto an ice rink in competition.

This porcine performer, named Boomer, has been training his entire life “for one moment: the chance to win Gold at the Animal Olympic Games.”

And, he has the added burden of being the first pig to compete in the Animal Olympics. That’s a pretty heavy weight for any ham’s hocks to handle.

With a special costume knitted by mom, and his practice schedule priming him for a win, this is one self-assured swine:

Boomer. “If you practice and try your

best, you can do anything.

Olympic glory fills his dreams the night before and with these words echoing in his pointed ears, he enters the competitive arena:

Boomer is a mere sprint away from realizing his dream, as he lines up with cheetahs, panthers, tigers, zebras and other faster-than-fast types. Uh, Boomer, can we talk?

He is waving at the crowd when reality hits him. The race is over and he has barely started as he’s covered in the dust of his competitors, zooming to the finish line ahead of him.

“Well” is not a pretty sight as Boomer collapses in a heap of heaving tears.

Oh well! Not to be deterred by a camera close-up from a sports analyst that queries to his face:

Do you think this was all a

Mistake? Hey, that’s the key word Boomer settles on. It’s all some huge mistake. Cheering up and on to the next event …and the next…and the next…all with the same result.

Boomer is not taking this well at all. He’s in high dudgeon, with cries of:

This is an outrage!

I demand a recount!

In the white hot media spotlight, Boomer’s mom remains proud of her son’s efforts, and reaffirms her love, despite his abysmal behavior, post loss.

May I just comment as an observer, that cannonball into the pool at the dive competition was not your proudest moment, young Boomer.

But wait, there is ONE more event to go; the gymnastics Grand Finale.

Tangling, tumbling and toppling over mats and beam boards, this pig is trying his darndest to bring home Olympic Animal Gold and glory.

But that final swoop into the Olympic flame,  landing on the analyst, Mr. Hamstring, clinches Boomer’s place in Olympic history as the lowest scorer…ever!

Think this bit of media menacing news can keep Boomer down as he is asked by Mr. Hamstring for his final words to the viewers at home?

Mic in hoof, he does have words for those at home:

but I realized something very

important. I realized …today has

been terrific practice for the WINTER

Sometimes kids…and adults… have to learn how to lose gracefully…as well as win  laurels and laudatory cries from congratulatory crowds and the press.

Victoria Jamieson has created a character   parents and young readers may recognize as they filter their way through the local organized sports culture of their young ones.

It can sometimes overemphasize competition as a end in itself, and that anything less than a win, teaches these young athletes nothing.

His little known De La Salle Spartan team from Concord, California, had an unbelievable 12-year, 151 game winning streak that ended at a game with the scoreboard showing 39-20.

The movie’s impact is felt not only in how the team handles both unparalleled  success, but how it navigates failure.

Bob Ladouceur’s head and heart is consumed in the film with not merely molding players for a team; he is shaping future fathers, entrepreneurs, CEO’s and just solid character in young men who need to learn not just plays from a playbook for a football game, but how to do broken field running in a game called life!

His team’s experience is played out in a great 2014 movie called, “When the Game Stands Tall” staring actor, Jim Caviezel. Listen to these quotes of Coach Ladouceur:

It’s not how hard you fall.

It’s how you get up.

It’s a great movie that models behaviors for kids that last a lifetime of overcoming not winning every time out. And hey, that would be…life!

Character is shaped sometimes in defeat as well as in victory, and I would not count out Boomer…or Cam Newton!