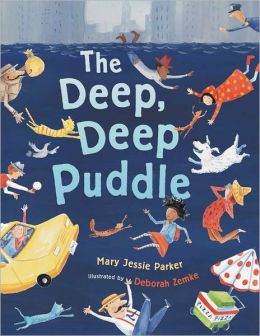 You Can COUNT On This Book!

Can there ever be too many picture books about counting? No, there cannot, to my way of thinking. But, it sort of begs the question. How can authors keep this rudimentary mathematical operation for young ones, freshly framed in a way that continues to appeal? In other words, can books have new and fresh takes on a familiar topic with variations on a theme? Counting books, thank goodness, do continue to do that, from classic counting books such as, “1 is One” by Tasha Tudor, winner as Caldecott Honor book in 1957 for her beautifully simple approach, to this bright and bouncy one I found called “The Deep, Deep Puddle” by Mary Jessie Parker in 2013. If you are looking for a counting book that has a story to tell as well as heads to count, this is a book that has fun with the fundamentals – of counting that is.

We all know that “what goes up must come down” is a fundamental law of nature, but does it hold true also for “what falls in, must come out?” Especially if the “in” is a series of people and things that inadvertently fall into a deep, deep blue puddle? Ms. Parker wants us to see for ourselves in “The Deep, Deep Puddle.”

If one stretches the imagination a bit and we watch spring rains descend on cities, one can almost see the happy and ridiculous outcome of an unrelenting rain falling on a busy city street. And let’s face it, we all love the sense of the comical where we see people confronted by head shaking phenomenon. Kids love the sense of the ridiculous and aren’t shy about laughing when they see it and they will, here.

Imagine, if you will, as this particular puddle deepens and darkens through a night and morning of rain creeping inexorably curbside. First ONE unsuspecting white shaggy dog comes a little too close to the edge of this deep puddle and the sounds of glub…glub…glub are heard.  They are followed by the entry of TWO stray cats, THREE thirsty squirrels attempting a leap-hop, FOUR pigeons heard tap-a-tap-tapping in a quest for seeds, FIVE children late for school and SIX tourists that wander too close to the edge of the cavernous puddle. Pretty soon there are taxis and street vendors and even NINE robbers, up to no good, who are swallowed by the puddle! Even TEN police officers tumble in as they attempt a rescue of this, by now, sizeable group of swimmers!

Thank goodness for the ELEVEN tanker trucks. They devise a clever plan to cordon off the puddle, drop vacuum hoses in, and in a series of loud schlurps, the deep, deep puddle diminishes rapidly leaving a comic conglomeration of taxis, squirrels, tourists, a shaggy dog, cats, pigeons, not to mention the infamous robbers, to be sorted from the crowd and arrested!

The soggy silliness of this watery affair is helped along by Deborah Zemke’s illustrations of bright blue, yellow, orange and red as this bedraggled bunch are disentangled from one another as the water dissipates.

But don’t be too sure the whole hilarious process will not begin again as the shaggy dog, wet from his watery wanderings, naturally starts to do what all dogs do when they’re wet. SHAKE!

Can it be the start of another PUDDLE? I certainly hope so. For this is a book that gives young readers a counting book of a puddle that keeps on giving kids not only practice in counting, but also sights and sounds that will delight, by the bucketful!