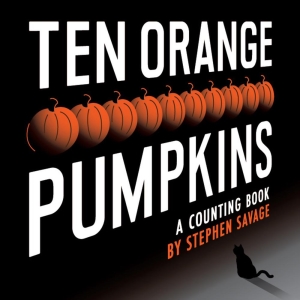 I’m Counting on These Pumpkins!

After the past two Halloweens, where one was eclipsed by a freak snowstorm and last year’s was compromised by a hurricane named Sandy, young ghosts and goblins, young and not so young, turned out in droves to celebrate this All Hallows Eve or Halloween.

And if your young readers want the shivery feelings of the 31st of October to linger for a wee bit longer, I can think of a wonderful book to get the counting started till next Halloween!  It’s called Ten Orange Pumpkins: A Counting Book by Stephen Savage and kids will delight in this pumpkin count down where the round, orange orbs disappear at a fast pace. The vanishing pumpkin vistas are beautiful.  Black silhouettes of spooky nights include the brightly colored, but diminishing in number pumpkins. set amidst a variety of backdrops.  The homey and haunting intermix include the silhouettes of laundry hung on a clothes line from a farmhouse window, churchyards, a warm kitchen atmosphere with pot bellied stove, a truck of pumpkins traveling over a bridge, a ghostly pirate ship at rest in a harbor with the glowing eye of a lighthouse high above and a witch’s stew a boil! With each change of scene the pumpkins are popping off the young readers’ radar, as poof they are gone whether from a chance lightening strike, becoming wrapped up in spidery spun skeins from a web, polished off to season a pumpkin stew of a witch’s brew, scooped up by skeleton pirates or any number of inventive ways that the author concocts to capture pumpkins and make them disappear. It’s a countdown to an absolutely vintage scene of the last jack o’ lantern left with a black cat sidled up to it. The cat is aglow with its outline set in orange off the light cast from the pumpkins traditional toothy grin!

Stephen Savage, whose New York Times bestselling Polar Bear Night was also named a Best Illustrated Book by the New York Times, has another winner with Ten Orange Pumpkins: A Counting Book. Young readers can count and recount the story and numbers of the disappearing pumpkins from now till next Halloween. It’s a terrific read aloud starring nine pumpkins that disappear on a Halloween night with a tenth whose grinning glow can keep the shivers of Halloween alive and well into the next season.