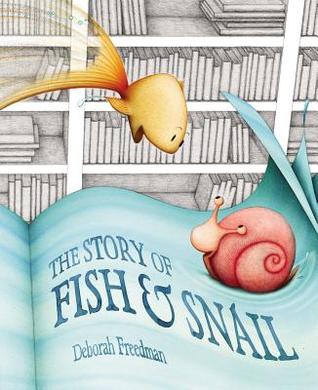 A Daring Jump into a New Book

The Story of Fish and Snail

Fish, imagined by Deborah Freedman of “Blue Chicken” fame has brought the concept of “show” in “show and tell” to a whole new level. Meet Fish who has an irrepressible eagerness to share a new story from a treasured book with his best friend, Snail. Fish wants to show the ocean, secret treasure and pirate ship in a book, by way of the two literally diving into it. And I don’t mean for a read and tell. Fish wants Snail to experience each and every daring adventure and sensory experience with and alongside Fish – Wow!  Let’s just pull back here for a minute or two, thinks Snail.

Mild mannered and the less adventuresome of the two, Snail immediately asks if there will be princesses and kittens involved? Snail is content in the book they are in. No “showing” is necessary in Snail’s small and self-contained world. Much like the shell carried as its home, Snail is not eager to venture too far from its comfortable confines.  “I do not like to play big dogs, or monsters, or pirates.” “I want to play kittens and sleep right here.” Borrring is Fish’s retort!

The retaliation is swift with Snail suggesting with great vehemence that maybe the Fish would rather live there “with NO SNAIL since the new book is wow and snail is boring!” OUCH! Well, if you put it that way, “Maybe I’ll go be a pirate by myself and never come back!” thunders Fish.

Bluffs and escalation of the ante are sometimes a good idea in card games, but definitely not in friendships. And this is where that leads:

Huh? Kids will naturally be heard saying. “Hey, the book can’t be over, can it?” Yes, they’re thinking the same thing as Snail. It’s not supposed to end this way – either the book or the friendship.

So, Snail takes the ultimate leap of faith – literally – into Fish’s adventuresome book with a loud SPLOOSH! Snail is in a strange and new book, calling Fish’s name. It’s kind of scary, no? But Snail is rewarded for courage shown with a hearty, “Snail, you came!  You are very brave”, as Fish commends a friend that literally walks off the edge of the known into well, the unknown. The key to any friendship is compromise, as Snail becomes First-Cat-Mate Snail to the Jolly Pirate Fish!

Kids will enjoy this summer read of two feuding friends who learn that “One is the Loneliest Number”, as the singing group Three Dog Night, put it.

And “The Story of Fish and Snail”, in perfect water-filled settings for the summer, agrees! Getting out of one’s comfort zone is never easy, but as Fish and Snail learn, as will your young reader, it helps when you have a friend who is there and understands your yin to their yang. It sure can make our separate and combined stories more of a life adventure. And it does for Fish and Snail – swimmingly!