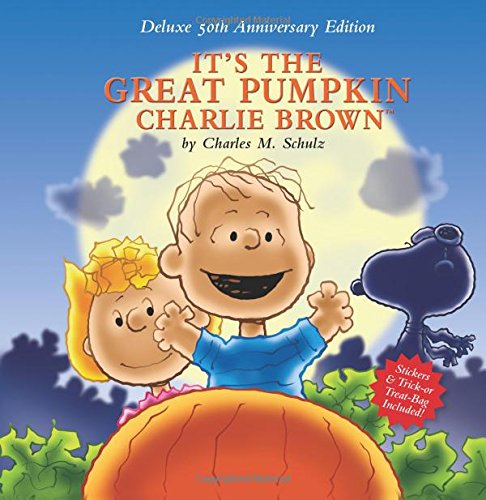 Can you imagine that it’s 50 years since the ever hopeful and blanket-holding Linus, along with the adoringly besotted Sally, sat in a pumpkin patch waiting for the Great Pumpkin to appear with treats?
I guess I can be honest that as a child this beloved animated special left me feeling a bit sad. But, as I revisited this 50th Anniversary Deluxe edition retelling the cartoon’s story, I found and felt some things I’d missed as a child.
Maybe that’s why it’s worth a revisit with both you and your child.
You may not know that without this absentee pumpkin tale of Charles M. Schulz that followed “Charlie Brown Christmas,” the Charlie Brown phenomenon of TV specials for kids would never have progressed.
CBS wanted another holiday special akin to Schulz’s enormous Christmas hit. They wanted something that would grow huge audiences that would continue to burgeon with each successive yearly showing.
The success of It’s the Great Pumpkin Charlie Brown cemented the future of all the Peanuts specials that were funded and produced in the future.
The Halloween eve tale called It’s the Great Pumpkin Charlie Brown featured almost the entire original cast from A Charlie Brown Christmas.
It starts out of course with the running gag that the sardonic Lucy continually plays on the trusting Charlie Brown; pulling away the football just as he’s about to kick it.
Only this time, she’s holding a signed document stating she will not pull the football away seconds before Charlie kicks, as has happened each and every time.
And, as always, kids root for Charlie, the trusting believer. Seems ironclad and unbreakable, right?
But, there is always a loophole, it seems in Charlie’s run for glory. Here, it’s a simple matter of legalese; namely the document isn’t “notarized.”
And, there is the gentle blanket-holding Linus, writing his annual note to the Great Pumpkin as he explains the tradition to Charlie Brown:

“Every year on Halloween night
the Great Pumpkin rises up out
his pumpkin patch and flies through
the air with bags of toys for children
everywhere,” explained Linus.

The adoring Sally agrees to watch with Linus for the Great Pumpkin.
And, here, dressed for Halloween was the very first appearance of the dashingly dressed Snoopy, atop his doghouse as the World War I Flying Ace, dressed in leather helmet, googles, and scarf, ready for his aeronautical duel with the infamous Red Baron.
Will the Great Pumpkin arrive? Will Charlie get candy this year instead of a rock?
For me, no matter how many times I see this special, the best moment is the hard edged Lucy getting out of bed in the middle of the night to find her brother’s bed empty. She dons hat and coat against the cold night air, to find Linus asleep in the pumpkin patch, huddled with thumb in mouth and wrapped in his ever present blue blanket.
Lucy says nothing. No, “I told you so.” No, “You missed all the fun.” She just gently carries him back to the house and tucks him into his bed. It’s a protective side of Lucy that she rarely shows and Linus will probably not remember. Sweet!
Did you know that the idea of Snoopy as the Flying Ace came from Schulz’s son, Monte?
Monte was a builder of model airplanes and loved WWI aircraft. Can’t you just see this young one wandering into his Dad’s studio and suggesting that Snoopy become an imaginary fighter pilot? And lo and behold, that idea became part of It’s the Great Pumpkin Charlie Brown.
Please don’t miss it, or this Deluxe 50th Anniversary Edition of It’s the Great Pumpkin Charlie Brown read that also includes stickers, and a Trick or Treat Bag inside.

ABC will broadcast the special on October 28th at 8pm this year.