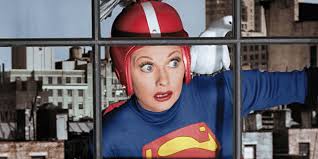 Yup, It’s 65 years since Ricky Ricardo’s voice rang out with that famous TV line – “Lucy, I’m home!”
Thought it might be a kick for kids to see part of the episode in which the superhero, Superman, visits the show and rescues Lucy from one of her many antics that sounded completely reasonable to her.
Great television series that captured the imagination of a generation with the everyday adventures of Lucy and Ricky Ricardo and Ethel and Fred Mertz.
https://www.youtube.com/watch?v=SxQpeIrr3wA