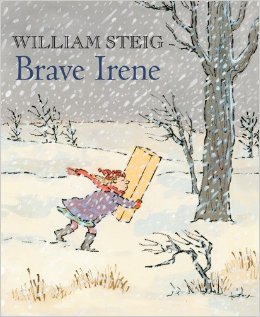 Be Brave in the Face of Adversity, Young Readers!

The hot summer weather we are experiencing now, cannot compare to the driving snow and howling winds from the past winter’s snow storms.

It also put me in mind of one of my favorite picture book authors, and conjured up scenes from one of his titles called….Brave Irene.

And, of course, the author is the incomparable William Steig, winner of Caldecott Honor book designation in 1977 and 1970 for The Amazing Bone and Sylvester and the Magic Pebble, the John Newbery Medal in 1983 and 1977 for Dr. De Soto and Abel’s Island, as well as The National Book Award for Dr. De Soto, won also in 1983. The author was William Steig, a picture book author who drew whimsical cartoons for The New Yorker and subsequently shifted to picture books in his 60’s!

And what an amazing Chapter Two was born.

Initially, as I mentioned, fame came by way of his wry, sly, and sometimes outlandish cartoons appearing in The New Yorker magazine.

Never let it be said that it’s ever too late to fill in the wishes on life’s bucket list, for William Steig is proof that’s a falsity.

Here, in Steig’s Brave Irene, Mrs. Bobbin, Irene’s mom, when first we meet her in the opening pages is two things…a seamstress and sick. She is too sick to deliver a gown made to order for the Duchess to wear to a grand ball.
With mom abed, and snow pelting the panes of their cozy cottage window, Irene refuses to let her even think of this most important of delivery runs. Irene will go it alone, despite mom’s protests.

Carrying farewell endearments such as “pudding” and “cupcake,” as well as the gown, Irene sets out in the teeth of the storm.

Steig has an endearing way of drawing you into the conflict that most stories necessitate, yet at the same time, he has a way of making the reader genuinely concerned about the outcome, at times. He knows how to build suspense.

Here, in Brave Irene, the wind is portrayed as an intelligence that is intent on keeping Irene from achieving her mission. With each unsuccessful attempt at forcing her to turn back, the wind is ever more relentless and passionate in its attempts to force her from her mission.
And Irene is just as determined and courageous in her will to achieve the goal and errand that sent her out into the storm.

When the wind rips open the box that carries the gown and blows it away, the question and gown hangs in the howling air. What now? Mission not accomplished? What use to go on?

William Steig has portrayed in Irene a plucky and resourceful heroine that trusts to fate and a sled made of an empty box to…well, you’ll just have to read the picture book.

Suffice to say, that winds can be kind…or maybe it’s fate that is kind.

Or, just maybe, it’s the inventive courage and resolute spirit of young Irene that will not be deterred, even in the face of what seems utter defeat.

Steig’s books were also wildly
popular because of the crazy,
complicated language he used –
words like lunatic, palsied, se-
questration and cleave.
Kids love the sound of those
even if they do not quite understand
the meaning.
Steig’s descriptions were also clever.
He once described a beached whale
as “breaded with sand.”

Brave Irene is a great read with an illuminating lesson of courage, determination  and tenacity for young readers that need to hear and see that “giving up” is never an option when there’s a job that needs doing and people that are relying on you to do it!

As a fellow New Yorker illustrator said of William Steig:

If we consider his entire oeuvre:
his prolific output – the inventive-
ness of his stories, so often in-
volving transformation; his pre-
cise and demanding language;
the sheer beauty of his pictures,
then his legacy can only be
described as unprecedented.

Your picture books are a living legacy to millions of young readers.