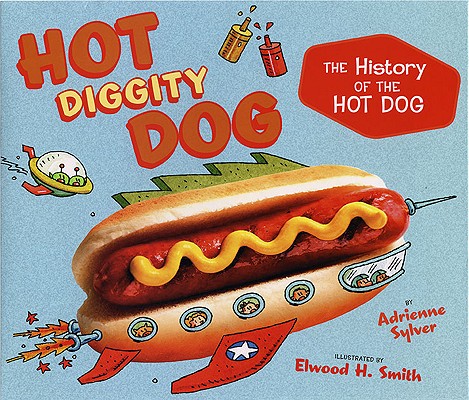 Hot Diggity Dog: The History of the Hot Dog

Here’s a great quote on the hot dog from the iconic movie star, Humphrey Bogart: “I would rather have a hot dog at the ball park than a steak at the Ritz.” Ain’t it the truth as regards this all American fare, followed closely by apple pie!

And, folks, it’s National Hot Dog Day: so what better quote to launch the day….and the dog!

Summer is spending itself with the speed at which kids consume hot dogs at a summer barbecue. So what better picture book to meet and greet it than Adrienne Styler’s homage to the hot dog.

This historical hymn to the hot dog will put parents and young readers in touch with their inner child and bring back fond memories of favorite hot dog hang outs and haunts you parents still remember! It certainly did for me. Mine was Callahan’s in Fort Lee, New Jersey. Since 1950, this roadside stand that sat next to a rival hot dog stand called Hiram’s, (yes, these TWO distinct places existed side by side, each with their own faithful followers for many years), quenched the taste buds of hot dog hounds from near and far! The motto of Callahan’s was, “So Big, So Good” and it was. More to follow, faithful frank followers!! 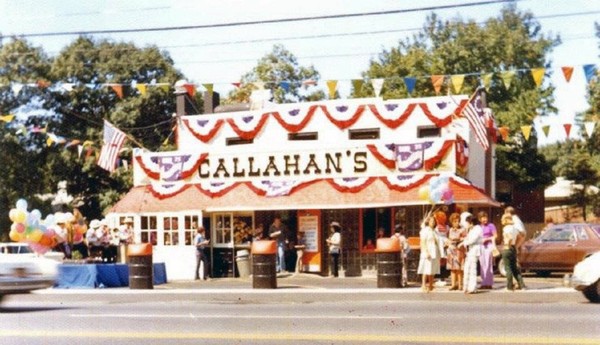 But Ms. Sylver’s picture book lets us in on the facts of how Americans fell in love with a “dog on a bun” aka a frank, wiener, or “red hot”, as they’re referred to regionally and we continue to consume them at a rate of 2 billion each July! A tasty tip Ms. Sylver mentions is THAT is enough hot dog links to encircle the earth seven times. Actually, the hot dog is not so All American a food as you may think. Its area of origination seems to have been Frankfort, Germany or Vienna, Austria in the 1400’s and later found its way to America in the 1860’s.

Kids will love learning facts about the birth of the bun. Did you know hot dogs were first sold bunless? Ouch! That burns the fingers! And after losing a ton of gloves that the vendor gave as hot dog “holders”, he asked his brother-in-law that happened to be a baker for a hand. The baker handed him a BUN for his franks. Necessity definitely was the “Mother of Invention” here!

The famous Coney Island hot dog sold for a mere nickel and in the Great Depression when jobs and therefore food was scarce, a nickel could buy a great meal and their popularity boomed!

Young readers will find out how the hot dog found its way to ballparks and even find that actors like the famous Humphrey Bogart were devotees of the dog when he said, as I mentioned at the outset, “A hot dog at the ball park is better than a steak at the Ritz!

Elwood H. Smith’s lively illustrations match this hot dog handbook to a tee! And the sidebar facts and suggestions included on each page will pique your child’s interest. It’s the perfect summer read. So, now let’s get back to MY favorite hot dog haven. Callahan’s has morphed into a food truck, as that seems to be the new craze today. You follow the truck for one of the greatest hot dogs – EVER. The relish is even a special blend! Now where is that truck parked next? Hmmmm. Callahan’s forever!

Here is a link to let you in on a taste of the history of Callahan’s!  http://www.callahanshotdogs.com/ 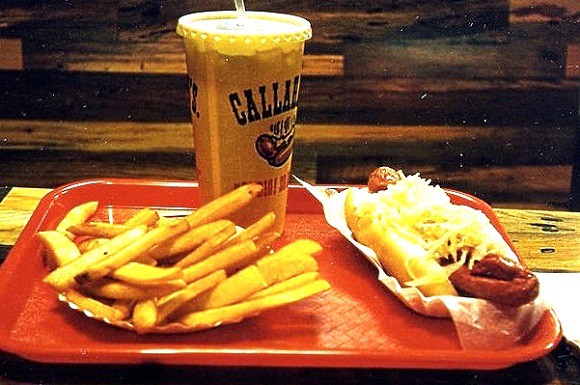