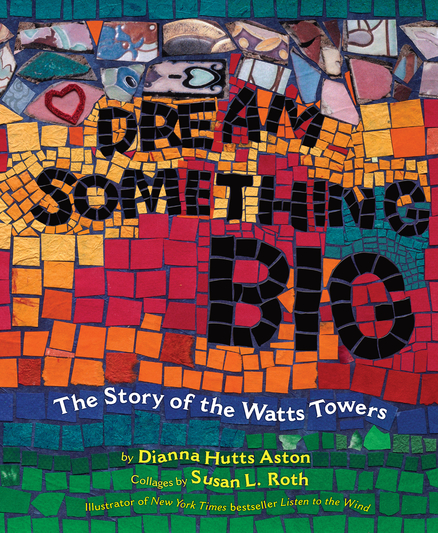 Dream Something Big: The Story of the Watts Tower by Dianna Hutts Aston, collages by Susan L. Roth

Children love to build things from a very young age. They are born construction workers if you observe them carefully. Baby boomers reading this book will have memories no doubt of constructing elaborate designs with erector sets or tinker toys. For the uninitiated these toys are still out there and still fun, but have been replaced in the current generation by their counterpart, the plastic Lego!

Filed away deep in our DNA is the desire to dream, to build and then fashion that vision with ones hands. It starts early in many of us and then somehow it is displaced by the practicalities of life. What a shame! Watch a toddler with blocks, carefully placing one atop the other, attempting to reach the apex until the blocks tumble over …. and they begin the process again. The Eiffel Tower or the Leaning Tower of Pisa must have started out as a kernel of a dream in someone’s head.

Thank goodness for books such as this one to remind us of those early stirrings in our hearts and what they can lead to if we have the courage to follow them and our gut.

“Dream Something Big” is that very idea lived large by an Italian immigrant who built his dream of a tower starting with a tiny chip of tile. This starting tile grew into what would eventually become a U.S. National Landmark!

An amazing true story is beautifully rendered in a series of colorful collage art, where Ms. Roth’s inventive and creative style brilliantly mirrors that of Uncle Sam or Simon as he is called, the creative force behind the Watts tower.

Marguerite, the young narrator of the story, joins her friend as together they collect bits of broken teapots, plates, tiles, mirror pieces, seashells and rocks mixed with cement to fashion his dream.

Marguerite is paid one penny for every filled bag she provides. As she puts it, “Pennies bought a lot of candy.”

Working weekdays in a tile factory each day, Uncle Sam has Sundays and holidays to work on his dream and work he does with love fueled by determination.

“In broken things, he saw what

no one else noticed.

He found hearts in the backs of

the sun in rusty gears.

The hearts and flowers wondered

“Why a man make the pants

“Why a man make the shoes?”

Children will certainly “get” the reasoning of the seemingly unreasonable making as Uncle Sam unlocks “the beauty of a broken angel, a bowling ball, a boot” in his creations as they eventually rise into three towers in which he carves his initials and the words, “Nuestro Pueblo”, Our Town. He creates a village for the world to see and enjoy.

Finishing his dream, Simon Rodia pins his life savings into his suit, deeds the triangular lot of land and its magnificent structures to a friend and departs!

The narrator never sees him again!

Luckily, the concrete dreams of this so-called foolish and crazy man suddenly become lauded as “a gigantic flower of folk art” and awarded National Landmark status!

This gentle, determined dreamer of a man, who wore the very fingerprints from his hands in an effort to build something of beauty and lasting value in gratitude to a country that gave him so much is inspiring.

Freedom to dream and dream big is the astounding legacy transporting readers young, and not so young, in this astonishing accomplishment of a single soul.

I had the burning desire after reading it to plant something, build something, anything, but most of all to make my life count for something in fashioning a thing of lasting beauty.

One can only hope young readers will feel likewise, draw inspiration from Mr. Rodia’s feat and be challenged to do the same.