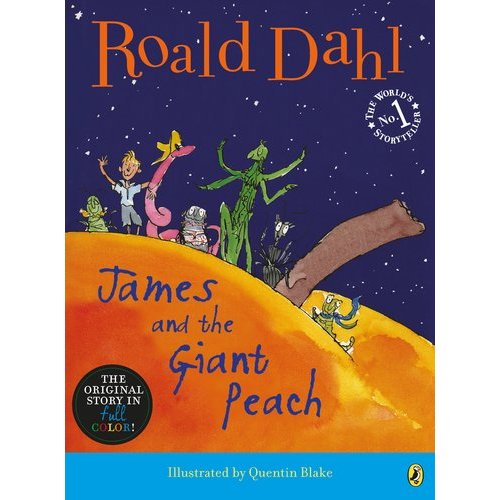 James and the Giant Peach by Roald Dahl; illustrations by Quentin Blake

Is it possible that 50 years have come and gone since the young reader’s world was introduced to the inventive, resilient and ever optimistic James Henry Trotter and his unlikely gathering of traveling companions who find themselves suddenly bobbing on and above the ocean blue in their golden, delicious peach? Old-Green- Grasshopper, Earthworm, Ladybug, Miss Spider, Centipede (he of the twenty-one pairs of boots, tied if you please), Silkworm and Glow-worm, welcome home!

My daughters read this book with great relish years ago, each with an intense dislike bordering on hatred for the infamously cruel and greedy Aunts Sponge and Spiker, reluctant inheriting relatives of poor James due to his parents’ untimely demise through an unfortunate runaway rhino in the streets of London.

In the world of Dahl, the unusual is usual and odd events to be taken with a resilient, “go with what life hands you and get on with it.”  It demonstrates a healthy dose of the famous British pluck that sustained stiff upper lips through WWII and its aftermath in which Dahl was a participant and observer. In this case it’s a matter of “when life hands you a giant peach, eat hardily of its interior tunnels and see the world.” Sort of a take off on “When life hands you lemons, make lemonade.”

Dickensian events of child-labor intensity, reminiscent of Oliver Twist and David Copperfield, befall Dahl’s beloved and trusting James, before a series of tumultuous, unpredictable events combine to change his fortune and family into an engaging group of insects.

When I told my eldest daughter of the approaching 50th anniversary of  “James and the Giant Peach”, she remembered Dahl’s book with fondness and with considerable detail, reminding me that this book, as well as some of Dahl’s others, spoke quite openly of, shall we say politely, “child neglect?” Matilda might be another we could point to in this regard. Child rearing is examined, even on the other end of the spectrum in the horrendous, yet laughable overindulgence manifested by some parents in Charlie and the Chocolate Factory.”

But Dahl is always fair in his assessments and also presents their wonderful polar opposites in his books. He skewers his subjects with perfect amounts of exaggeration, wit and sly irony that the reader cannot help but laugh out loud at passages. Yet, at the same time, the reader could be mentally wool gathering, saying, “Could that be me”?  Nah, no way, but maybe!

But back to Master Trotter and his adventures with the insect family fill-ins. Magic, dispensed in a bag from an odd black bristle-faced man, is filled with glowing crystals made from “1000 alligator tongues boiled up in the skull of a dead witch for twenty days and nights with the eyeballs of a lizard!” For full effect, the odd combo is added to the fingers of a young monkey, the gizzard of a pig, the beak of a green parrot, the juice of a porcupine and three spoonsful of sugar. Stew for another week and then let the moon do the rest. Not finished yet. Take 10 hairs from your own head, boil and ingest. Huh? All this is thrust into James’ hands with the admonition that once ingested, “marvelous things will start happening to you, fabulous, unbelievable things – and you will never be miserable again in your life.” Great, huh? You can never count on a good thing – or can you? James trips and the wriggling, twisting magic crystals disappear into the ground. What a sad end to a sad story, right?  Wrong! This is the beginning of James’ magical journey. What a lead in!

One admires and is in awe of James and the quiet gutsiness he displays as multiple obstacles are surmounted. He exhibits a calm demeanor in the face of hand wringing calamitous types among the insect swarm he meets who are beneficiaries of the unintended consequences of his dropped bag. James exhorts and urges the others to use their individual skills and talents for the good of all. Scrapes of enormous proportion are dealt with, and inventive practical solutions are found. Collectively, with James as their driving force, they start to believe in themselves and each other. They equally share with James their worldly-wise observations as Old-Green-Grasshopper gently enthuses, “My dear young fellow, there are a lot of things in this world of ours you haven’t started wondering about yet.” James learns as well as teaches. His insect comrades teach him a thing or two about “normal” in their world. That’s the great thing about literature in general, and for kids in particular. It gets and keeps them wondering at the world and life. It feeds their need to dream, imagine and “what if.”

If you’ve never read this classic Dahl with and to your children, I urge you to pick up a copy this summer.

Kids will share a pretty amazing adventure with James as well as learn, tucked in between its pages, some pretty wonderful life lessons. Some wisdom Mr. Dahl’s books model may include – be of good courage, show optimism, be resilient in the face of adversity, problems have solutions waiting to be found, with each of us having a significant part to play, fearful imaginings are sometimes worse than the reality, kindness may be found where least expected, and most of all that life is an adventure to be savored. Savor it all – the good and not so good. Just be sure to give it your all, doing the best you can while looking for the best in others. Who knows? They may just turn out to be a band of insects! New York might just be in need of such an intrepid group of innovators again who might just plunk a fantastically huge peach on the spire of the Empire State Building and share a tumultuous ticker tape parade of welcome through the canyons of New York.

And what of an ending to this tale of the sad, lonely James Henry Trotter? Well, he might just be living in the biggest peach pit in the world in Central Park with all the friends a lonely little boy could ever want. You never know. Stranger things have happened in the world of Dahl!  You go James – for another 50 years!