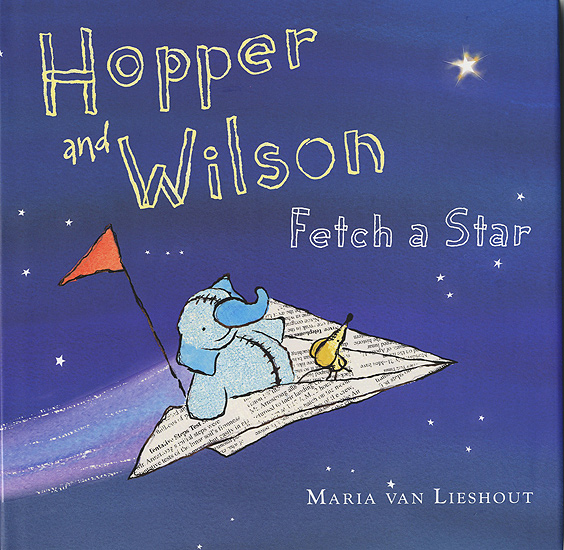 Hopper and Wilson Fetch a Star

Catch a falling star and put it in your pocket

Never let it fade away.

Catch a falling star and put it in your pocket

Save it for a rainy day.

The lyrics to this 1957 song, sung by the inimitable Perry Como, slipped into my head as I read the picture book, “Hopper and Wilson Fetch a Star.” What’s the difference between fetching and catching, anyway? They both seem to involve a task that is taken up with a fair amount of some sort of energy and even adventure in the air.

And it IS a second adventure for the two fast friends of Maria van Lieshouts’ “Hopper and Wilson.”

Hopper, a stitched up the front, pale blue cuddly elephant and his best friend, a small yellow mouse named Wilson are in search of a star. So odd that I am writing this blog on the Christian feast of the Epiphany when magi from from the east sought a star too! I just love synchronicity, when events tumble together in life that just seem to align all by themselves!

I guess I just feel a certain connection with this simple picture book and these two fast friends on a mission aboard the slimmest of neatly folded paper airplanes to find the PERFECT star; a star all their own. What is it about the kid gene in Hopper and Wilson that can conceive and dream such plans, as it urges them on, and with sometimes needed courage, sees it through to its completion? When did we, as adults, lose the kid gene? Guess that’a a blog for another day.

The dock from which they first gaze out at the starry night sky and concoct the plan looks like our dock. The only thing missing is the lonely cactus in a pot that sits beside the duo. Zooming into space aboard their paper ship, these two are VERY picky about their choice in stars. Brightness, pointiness,and sparkliness are all non negotiables that factor into the ONE!

But Ms. van Lieshouts‘ reasoning is very true in her deceptively simple tale. Nature IS healing and the more we align ourselves with it, it can, like it did with Wilson, light the way for the oneness we seek with each other and the world we live in.

I must remember to, as Wilson does, say a “Thank you” to all the twinkling stars and the firmament that lies below it.

Best friends Wilson and Hopper seem to get it, and so will your young readers, in this amazing picture book of seeking, losing and finding ourselves in nature and each other!

Maybe this book will make you and your kids feel like singing along with Perry to “Catch a Falling Star.” Great song to sing along to with Hopper and Wilson!