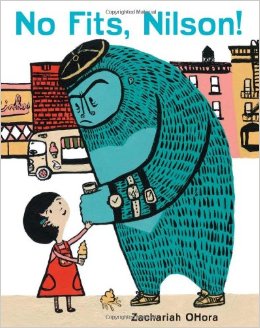 The Gorilla in the Room

Mr. Ohora has found a charming device in his “No Fits, Nilson!” picture book to take the onus of “having a fit” or meltdown, from small, bob-haired Amelia, and transferring it “fittingly” enough onto her seemingly huge blue toy gorilla, named Nilson. Nilson wears a jaunty cap and three watches attached to each hairy blue wrist.He’s pretty endearing and so is Amelia – when he’s not having a fit.

Is Nilson really that BIG and is HE the one having the meltdowns or is it Amelia, providing her with the opportunity to emotionally distance herself from the consequences that flow from them? You tell me, when you read along with your young one.

Nilson and Amelia are seemingly joined at the hip. They do everything together from uke playing to block tower building. The fly in the proverbial ointment always occurs when things don’t go as planned, as in Amelia’s scooter bumping the blocks.

Nilson throws a fit of gigantic proportions, completely out of sync with the offense. Strange indeed that they BOTH get a time out from mom!

Amelia is nothing if not understanding, in that she does her darndest to help Nilson gain some emotional control over HIS fits. Diversion is her primary tactic, and a good one, as she diverts both Nilson and herself with a banana pancake breakfast.

Nilson is not the most compliant of gorillas, Amelia finds as she coaxes him on an errand run with mom, deeming it an ADVENTURE, but a very long line in the Post Office brings forth the “No fits, Nilson”! mantra as she hands him a coin purse as a diversionary tactic.

With each near meltdown, Amelia’s mom cautions Amelia aka Nilson that sitting quietly NOW may bring something better later, like banana ice cream on the way home. Is this bribery? Maybe. But what parent when faced with a public display of tantrums has NOT used this device on at least ONE occasion.

Let me go on record as saying I do not recommend this tactic as an ongoing solution to “fits” as it can indeed get out of hand as the stakes and bribes get higher. Learning to self soothe in the long run is the better tack, as for instance when mom is not around for a meltdown, what then?

Ah, the longed for banana ice cream arrives and there is but ONE scoop left that is taken by Nilson. The gloves are off and the ladylike Amelia suddenly turns into a growling, stomping, roaring Nilson or was it Amelia all along with Nilson, the perfect alter ego, to whom the blame is shifted?

THIS time it is NILSON that calms down the growling gorilla aka Amelia and ceding his cone to her and opting for a choice of chocolate, a new taste treat is born called Choco-Banana-Twist! Compromise seems key here.

Mr. OHora’s art is bright and the bouncy blue of Nilson looms large as if it is the personification of the literal “gorilla in the room” that pops out from Amelia at odd times. Seems Mr. OHora has a menagerie of some fifty-seven stuffed animal friends living at HIS home along with he and his wife. Wonder if a gorilla is among them?

But I would be less than honest if I did not express some reservations about the compromise tactic. Perhaps I would feel better about it if it could have been modeled early to Amelia that even in the world of childhood, someone else may be ahead of you at some time in life and that last scoop of banana ice cream may go to someone else. Her disappointment was real, but perhaps there is a way to grow to accept that fact. It is a learning curve for the young, but a much needed one.

For that that is how young Amelia will learn to deal with disappointments on a small basis when she is young and as she grows, to navigate bigger ones. Immediate gratification is something we all struggle with in a culture that makes instantaneous satisfaction very appealing. Delayed gratification is a harder thing to learn, but a builder of character and learning in school. We don’t learn in school without some patience and sustained attention span with a primary example being learning to read!

But, in the final page of the book, we see Anna and the the real, very SMALL stuffed Nilson, tucked cozily beside Amelia in bed as she whispers to her alter ego, in the guise of a tiny gorilla, “No fits, Nilson!” Amelia is a young lady on a learning curve with a trusty gorilla by her side. My bets are on her and Nilson – and mom!