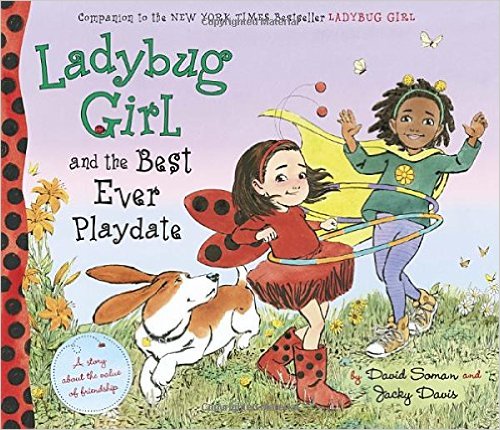 Ladybug Girl and the Best Ever Playdate

By David Soman and Jacky Davis

Can you remember your favorite playmate or playdate from childhood?

I’m sure something sticks out in your memory.

Today, a trend called the “playdate” has emerged because of a number of factors including time constraints that call for the  scheduling of children’s play, the distance involved in getting kids together, and the reconfiguration of what a “neighborhood” has come to mean.

Maybe it has become a thing of the past in some areas of the country, but in the long ago of “way back when” time, “play” usually meant just that. It meant unfettered time, where a bunch of kids got together and said, just as in the play/movie “Marty”, “Wadya wanna do?” or, more particularly, “Wadya wanna play?”

Play could mean Hide and Go Seek, Jump Rope, Hopscotch, Roller Skating, Tag, or my favorite, Let’s Pretend”, which could go in as many directions as your imaginations could take the group. It went from cowboy scenarios to good guys getting the better of bad guys, to literal “plays”.

By plays, I mean reenactments of fairy tales like “Cinderella” with everyone either playing a part, or being behind the scenes.

In “Ladybug Girl and the Best Ever Playdate,” Lulu aka Ladybug Girl has her own “playdate”, which is what we used to call “having a friend over.”

And her friend, Finny, brings along her amazing Rolly-Roo to the “playdate”. It’s a rolling, on wheels endearing horselike toy that you can ride, talk to, dress up and even hide inside.

Is it Rolly-Roo that Lulu is enamored of or is it the chance to play with Finny? Hmm.

Finny asks if Ladybug Girl wants to play dress up? I loved that one as a child. I remember my two best friends on our street and myself, dressed up as nuns and went around collecting money for the poor. We were chastised severely by a local shopkeeper with no sense of humor who told us it was against the law to pose as nuns and ask for money. We were horrified and fled.

Blah! We were giving the money to the poor; not keeping it. That attempt at dress up was short lived, but memorable.

Anyway, every attempt by Finny to play with Lulu in “Ladybug Girl and the Best Ever Playdate” seems to begin and end with Lulu firmly in charge of Rolly-Roo. Finny is a side car at best.

But what happens when something happens to poor Rolly-Roo? Are the wheels off the cart of this playdate, and the friendship as well? Or will Finny and Lulu aka Grasshopper Girl and Ladybug Girl find a solution and fix both Rolly-Roo and the friendship – together?

My money is on friendship. Being right or  having a friend? Easy peasy choice here to the slow resolve of what to do to renew a tear in a friendship.

This picture book brought up a memory for me. It brought up a time when my two best friends on the block and I didn’t talk for what seemed like months. What was it about? I can’t remember. But, in my mind, I was right and stuck to my guns – and so did they. A silly silence ensued in the friendship. I ached for the easy relationship to be renewed, but a painful pride got in my way.

The Three Musketeers were derailed for a bit – just like Rolly-Roo, Lulu and Finny.

Till one day, one of the two girls said to me, “Wanna be friends?” I airily replied, “Okay”, but my heart skipped with relief.

If only I had had a book all those years ago like “Ladybug Girl and the Best Ever Playdate” to point the way to a resolution of my childhood tiff; and a pair of picture book heroines that truly say, in so many words, “Friendship trumps all!” And it does!