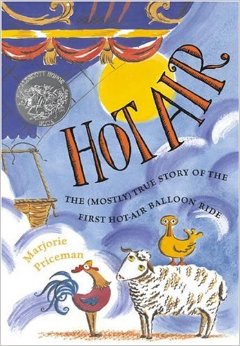 You’ve probably seen them once or twice. They ride high up among fleecy cloud formations. Big, colorful bubbled balloons that glide swiftly through the sky, festooned with decorations, and attached to a basket for passengers to ride in.

Maybe you’ve dreamed about taking a ride on one yourself, or even had the opportunity to do so at a vacation site.

Then please hop into “Hot Air” by Marjorie Priceman, with your young reader, as it provides a colorfully picture book perfect window into the very first hot air balloon’s inaugural flight.

With some literary license of “what might have been”, Ms. Priceman’s wonderfully bold and colorfully larger than life art recreates the adventurous ride of the first air borne balloon –  AND its animal passengers.

Imagine the setting if you will. It’s the palace at Versailles {sigh}, with its 700 rooms, 15 fountains and 2,000 manicured gardens in full bloom. And it was the take off spot where, on September 19, 1783, with a ton of notables present, including King Louis XVI, Queen Marie Antoinette and Ben Franklin, a demonstration of the first hot-air balloon took place.

The amateur inventors, Joseph and Etienne Montgolfier, are ready to show off their splendid and exciting new mode of transport to the waiting crowd.

Ms. Priceman’s charmingly woven tale of a duck, a sheep and a rooster aboard a solo flight in the Montgolfier’s trial balloon, is as big, bright and beautiful as their ride.

Her picture book takes and traces the farm folk aloft on an exciting excursion over the French countryside, solo!

In actuality, the trio did fly solo in a fifty-seven foot high, forty-one feet in diameter, 1,597 pound balloon, not counting an additional 900 pounds for the basket, the duck, sheep and rooster.

The flight lasted all of 8 minutes, but what a ride. And Marjorie Priceman’s Caldecott Honor Award winning book will hold young readers in thrall as they travel boldly where no farm animals have gone before. At least, I think not.

She pictures a small boy on a town roof top  shooting arrows upward at the balloon as it glides by, clothesline apparel swirls upward in the balloon’s draft, near misses occur on church spires on which the passenger sheep attaches an errant sock, and dive bombing birds clad in clothesline castoffs, circle the balloon in a frenzy. Amazing!

Young readers will not know where to look next as the trio’s flight unfolds, but they will be charmed immensely by the exploits of this stalwart bunch of feathered and furry air borne animals.

Watch for a duck-created homemade  swimming pool in the air; maybe the first one ever, and very inventive

Young readers will relish this ride, a safe touchdown, and the trio feted with much food and frolic at their safe arrival.

The historical details of the ride, given at the rear of the picture book in “A Brief History of Montgolfier’s Balloons,” are quite accurate, but Ms. Priceman’s picture book imaginings are the best.