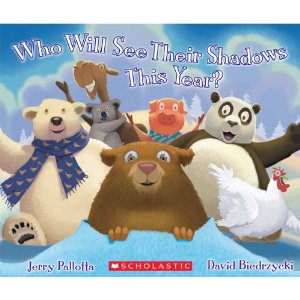 The Groundhog’s Special Day Is Today!

Who Will See Their Shadows This Year?

By Jerry Pallotta and David Biedrzycki

February 2nd is here and it is the focus of the popularity of a certain groundhog. His popularity skyrockets and his folkloric history as weather prognosticator extraordinaire comes to the fore.

Namely, if he comes out of his burrow and sees his shadow, we’re in for six more weeks of Ole Man Winter and if not, the zephyrs of spring breezes will come early.

But what if the sudden once a year celebrity of the groundhog causes jealousy to rear its petulant head in the animals of the forest? Such is the result of animal competition in “Who Will See Their Shadows This Spring?” “Their” is definitely the operative word with this group of groundhog wanna bees.  Hey, they’re in a grumpy mood to begin with as winter drags on…and on. The fed up faces of these denizens of the forest in the midst of the winter doldrums are very funny. They’ve had it and are heavy lidded and harried! Check out the beleaguered buffalo in the initial gathering of this winter weary lot. He’s beat and ready to bellow.

Leave it to the chicken to start the green eye of envy rolling with the quote, “But…why should groundhog get all the attention?” “What about us”? The chicken throws down the gauntlet to groundhogs everywhere with, “Let me try my shadow!” Her attempt is met with a driving rainstorm, followed quickly by a succession of other animals attempting to bring spring. The polar bear’s shadow causes a blizzard with the dog’s outline leading to a sudden influx of dense fog. The shadow of the pig causes a hurricane to ensue and the buffalo fares not much better with sleet pelting the forest folk as his shadow hits the ground!

Frustration is beginning to settle heavily on the shoulders of the animals as they try to cajole and conjure spring into appearing. Maybe if they try a panda shadow, he might be able to wield a little extra clout with Mother Nature. HAIL STONES appear in buckets. A koala, camel, butterfly and even a ring-tailed lemur and peacock’s attempts are variously met with mist, gale-force winds, tornadoes and hot, muggy weather. Not exactly the spring they had in mind.

Are they ready to say “Uncle” and let the groundhog do what he does best and will he awaken in time for February 2nd?

This is a perfect read aloud for the younger set that may identify with the feelings of animals tired of the groundhog getting the American Idol-like spotlight every 2nd of February. For a culture that thrives on celebrity, this book is a humorous take on the light shown, even in the animal world, on the 15 minutes of fame given every February 2nd to a groundhog.

Punxsutawney Phil, get ready for the flash bulbs and your photo op. Smile for the camera, please! And this picture book is apt to put a smile on any young reader’s face.