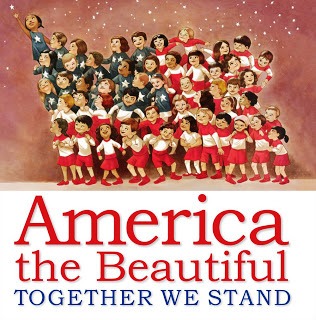 America the Beautiful: Together We Stand

Ms. Bates, a Massachusetts born poet, who taught English at Wellesley College, came up with the famous words to “America the Beautiful” as she became inspired by the sights seen, as she traveled from Massachusetts to Colorado in 1893.  Her poem has at times rivaled “The Star-Spangled Banner” as the national anthem of our country.

This is a wonderful book to share with your young reader come July 4th, as it is not only filled with the words to the song, but each line of the poem is illustrated by one of ten terrific illustrators that bring their own unique artistry to those famous words.

What a list! They bring a diversity of ethnicity and talent to this amazing picture book.

Each page includes not only a line from the poem illustrated by this “illustrative group”, but a defining quote from a spectrum of ten Presidents of the United States. Listen to just a few:

we can do if we’re

“Keep your eyes on

the stars, but remember

to keep your feet on

hope for the future,

are the minds and hearts

of our people, especially

Each child-filled illustration, alongside a Presidential quote and a line from the famous poem, is a blending of the patchwork quilt of young faces making up the future of our country. They are its best hope. And this book is an affirmation of that important fact.

Your young reader will savor the words in print they may have heard many times, as well as the additional stanzas that most of us have never heard or have forgotten long ago.

But, I bet they will come back to you as you read them with a child. In the back of the book is a two-page listing of Landmarks and Symbols of the United States.

Did you know that the rose was chosen as National Flower in 1986? I knew that the bald eagle was a symbol of liberty and freedom, depicted on the Great Seal of the United States, but I didn’t know it is found only in North America or that the Washington Monument is the world’s tallest stone structure. Kids love encyclopedic facts!

The cover is a representation of the American flag made up of children in red, white and blue tee shirts and shorts. Reminded me of the Disney movie, “Pollyanna”, and a scene towards the end of the movie. At a charity bazaar the closing skit is backed up by the small town band of Harrington town playing “America the Beautiful”. Hayley Mills as a stripe on the flag steps forward and sings out the lines:

God shed His grace on thee

And crown thy good

From sea to shining sea!”

The looks on the faces of the townspeople as the camera pans across the crowd with their simple goodness, becomes the concrete representation of the words of the song, despite their petty, small town sniping and individual grievances. Beautiful!

Hey, it may be old-fashioned, but may I give a plug for patriotism? I love the simple words that end this book describing America and its initial vision.

We, as a people, and a government try, we fall short, we try again and again to get it right. And, as a country more than a mere 200 years in existence, we are still trying, stumbling and rising. We try to seek and find a more just and equal path for all Americans.

The simple words that end the picture book are true words emblematic of this great experiment.

“America’s government is based on a democratic system. It is one of our most valuable and cherished gifts from our founding fathers.”

Please sit down with your young reader on July 4th or any day, and introduce them to the faces of the future; faces just like theirs!