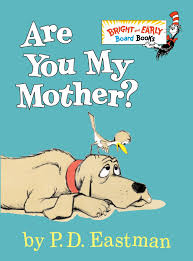 Happy Mother’s Day! And the Answer to the Question from the Title of This Sixty-One Years Young Picture Book, Still Resonates Today!

Are You My Mother?

I’ve heard it said, and I don’t know if it is merely anecdotal, or based on real scientific study, that a mother can recognize her newborn’s cry in a nursery, and even pick he or she out from a field of infants, behind nursery glass, swaddled in their bassinets.

This would not surprise me in the least.

Mother love and its feeling for a child, be it man, mammal…or avian, is usually that strong, that she, by instinct alone, could probably discern which child were hers.

But, is the reverse true?

Do infants, from an early age, have a sense of who their real moms are?

P.D. Eastman’s 1960 picture book, “Are You My Mother?” has a “bird’s eye” perspective on this question…from a tiny bird.

Mom is nest sitting, and, of course, as she does, her first concern, beyond safety for her young one is…food.

As mom flies off on a foraging expedition,  baby bird makes an ill-timed and unexpected entrance into the world, with a shell-splitting pop.

And, his very first query is a natural one, as in, “Where is my mother?”

Unable to fly, he does a neatly executed tumble flop from his nest, and ventures off in search of mom…on foot. Flying lessons will come later…from mom, natch!

What follows is a series of encounters with a kitten, hen, dog, plus a cud munching cow who are all queried with the same question from the budding bird, which is… “Are you my mother?”

Instinctively, this small one knows he isn’t kin, nor belongs to any of these animals.

Leaving off animals, he is now on to querying machinery, while christening a steam shovel he encounters, aptly enough, Snort; the baby bird is conveniently lifted aloft by Snort, full circle back to his nest.

And guess who cruises in with dinner in the form of a fat worm to the delight of the baby bird, who emphatically instinctively avers, “I know who you are.”

Baby bird further clears up any remaining identity confusion in his own mind, as he looks up from the comfort of her wing, as he murmurs, “You are not a kitten, or a hen or a dog, You are not a cow or a Snort!”

“You are a bird, and you are my mother.”

P.D. Eastman’s sweet classic on the age- old question of identity, speaks to the deep human longing to know who we are, where we come from, and where do we belong?

P.D. Eastman’s answer, in picture book prose, is given with assurance from a baby bird Q and A that young readers still relish.

This delightful picture books cements the bonding process that has existed for mothers and babes since the whole process began.

Birds of a feather still do flock together, at least when they are newly hatched into the wide, wide world.

And P.D. Eastman’s book is still there to give comfort and consistency to children’s questionings some 61 years after its publication.

And, human moms too, by inference, are still there today to both answer and anchor those same essential questions for their young ones.

Both are gifts from God.