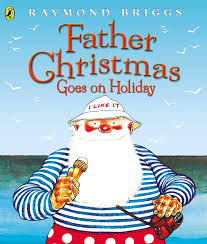 Children’s author/illustrator Raymond Briggs died this week. His books were well known and loved by young readers…. and adults like me, who dearly love his cheeky humor.

One of his most famous titles is “The Snowman.” The cover flap of the book opines that “Even a preschooler can read this story – because it is told without a single word! Raymond Briggs uses more than 175 subtly colored, neatly arranged pictures to tell of a wondrous winter adventure shared by a little boy and a snowman who has magically sprung to life.”

Please do give this iconic title a look, too.

But for our purposes today, it is Father Christmas who has our hearts as he goes on vacation.

Yes, he is kind to animals and children. But, when it comes to his Christmas Eve and his annual airborne sleigh ride, he can complain with the best of them about the weather, the wind, sooty chimneys and so much more.

He is a delight.

Done in cartoon captioned art, the original “Father Christmas” should be taken in and savored BEFORE going on to “Father Christmas Goes on Holiday,” as to enjoy the full flavor of the charm of this man among men.

Sitting up in bed, then storming about the place, he opines grumpily:

“Summer’s coming! Hoo-blooming ray! Time to be thinking about me holidays.” All I can think about… Stuck up here…On me own…In the cold…What a life.”

First published in 1975, then reissued in 1995 by Puffin Books, it’s a classic in every sense. This Father Christmas is fully human and not above his fair share of freely grousing and grumping about being who he is and the burdens borne by being Father Christmas.

But where to go and how to get there? Think this is a man who only carries a bag of toys one night a year around the world? Think again. This is a man who can BUILD a flying motor caravan that can fly him where he wants to go by retro fitting his sleigh pulled by flying reindeer! It’s Christmas red and a humdinger, trimmed out in comfy bed and all.

But this Father Christmas is a sentimental soul as he bids good bye with a snuffle into his hankie at Northern Kennel, Inc. to Cat and Dog as they are simply called.

Pulled by the flying reindeer, he is off to La Belle France, where he endeavors to adapt. Being Father Christmas, it’s a trek of a terrific termagant.

From new clothing, toting an inordinately large baguette, being bedeviled by escargot and a whole lobster in cream sauce, all he really longs for are some chips with HP sauce. But the Creme a l’orange needs no translation and is consumed with gustatory pleasure. BUT, when the bill is presented, Father Christmas’ response is… “Crumbs! Blooming expensive!” Got that right, mate!

Young readers will be delighted at the adventures of Father Christmas as his motor home is literally rocked by a herd of cows in the French countryside as he tries to settle his tummy from the rich delights of his meal. Trying to settle his stomach with a traditional Brit breakfast, he sees a lone croissant delivered to his plate. Blooming breakfast!

On to Scotland where he is a bit more at home, clad in kilt and consuming haggis, but the cold water is a bit more of a freezing surprise than he bargained for when he hops in.

Nero’s Palace in Las Vegas? Not a match made in heaven you say? Well the steaks and fries are fine, the gaming tables to his liking and the water and temps are just bloody wonderful. “Ta, Ducks,” says Father Christmas, supine on a chaise lounge, as he is served poolside by the glam wait staff.

And in a twinkling, his funds are depleted and it’s off home again. And what awaits? Yes, his beloved Cat and Dog are happy to see him, but oh those tons and tons of letters from you know who await him as well.

Donning his old red work clothes, he’s still stuck up there, on his own, in the cold, but in the words of Father Christmas:

“Still, at least I’ve had a blooming good holiday!”

And young readers will delight in tagging along with him.

What could say Christmas in Britain more than the Christmas Cracker; a decorated tube filled with paper hats, advice and small toys. Father Christmas wears one in the first book and so did our family last Christmas to honor a British guest.