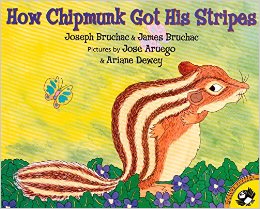 Life Lessons from the Bruchacs

How Chipmunk Got His Stripes

By Joseph Bruchac and James Bruchac; illustrated by Jose Aruego and Ariane Dewey

I’m sure I’ve seen a chipmunk or two scurrying across the farm fields this spring, so when I saw this picture book, his look started to make perfect sense to me – in its literary back story.

Most cultures have explanations in story form of how things got the way they are in nature.

And, this particular tale finds its roots in a widely told one among Native American Indians, as the Author Notes point out.

Young readers will love the toe-to-toe or paw-to-paw boasting contest, between a bear that boasts he is the strongest of all the animals and can do anything and a small, Brown Squirrel that says, Not!

The Brown Squirrel even has the temerity to ask the question that ups the ante of the word, “anything.”

“Can you tell the sun not to rise

And the gauntlet is thrown down as Bear says Yea! and squirrel says Nay!

The sun will not come up, hummph!

The sun will not come up, hummph!

And Brown Squirrel counters this boast with his own:

The sun is going to rise, oooh!

The sun is going to rise, oooh!

The entire forest family is awake all night to see who will win!

And, it’s that cheeky Brown Squirrel, of course!

But, can he be gracious in victory, as his wise grandmother has previously advised, with the shared wisdom of age?

He has to begin teasing the Bear:

Bear is foolish, the sun came up.

Bear is silly, the sun came up

Bear is stupid, the sun –

And, as the chant increases in tease-worthy words, so the Bear’s anger increases to the point of….

Well, now that would be telling the entire tale, wouldn’t it?

Suffice to say, that both animals learn a lasting lesson, though it seems the Brown Squirrel wears his for the rest of his life for all to see.

Both boasting and teasing don’t pay in the short or long term, is the moral for Bear and Squirrel aka Chipmunk, in James and Joseph Bruchac’s tale of a striped tail.

It was named an NCSS-CBC Notable Trade book in the field of Social Studies, as well as “Parenting Magazine” deeming it a “Reading-Magic Award Winner.

And Kirkus Reviews had this to say:

The Bruchacs translate the orality

of the tale to written text beautifully.

humor of the text perfectly.

This terrific tale called “How a Chipmunk Got His Stripes,” has a gentle and humorous way of imparting a “life lesson” that may calm both boasting and teasing in your household for a bit.

It’s a great read aloud for young readers, too!

No, let me rethink that one!