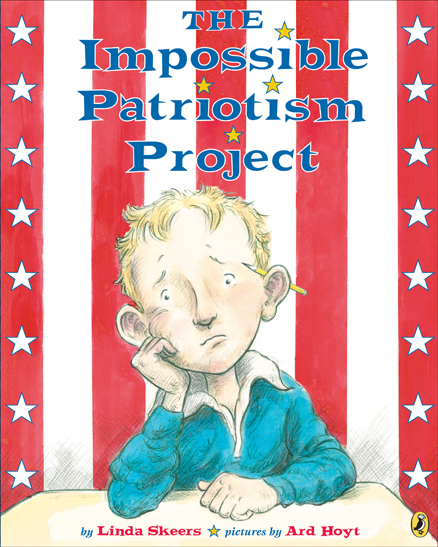 The Incredible Patriotism Project by Linda Skeers, with pictures by Ard Hoyt

Linda Skeers’ book The Impossible Patriotism Project seemed a perfect way to illuminate through Young Reader’s books, the “invisible”. Honored as a CBC/NCSS Notable Trade Book for Young People, it is as School Library Journal states, “The gentle depiction of a boy who turns his sadness and loneliness into a way to respect and honor his father…”

Anchored by Ard Hoyt’s believable illustrations, Ms. Skeers’ book was inspired by a Fourth of July decorating contest at her nephew’s apartment building. Unable to afford decorations, they hung her nephew’s uniform from the balcony. He had just arrived home from overseas military duty. Their simple entry won the contest, and thus the kernel of an idea for the book took shape.

In the book, Caleb and his classmates are tasked with coming up with individual projects that symbolize the word “patriotism”. His excited friends eagerly plunge into the timeless symbols of The Liberty Bell, Lady Liberty, a map of all fifty states, as all presidents must know their whereabouts.

Caleb, on reflection, thinks he has a very good idea of what patriotism is and who exemplifies it to him. How he presents his heartfelt and very personal project to the class, and most importantly, how they respond to it is well worth the read.

Children will respond, I’m sure, to the simple honesty of Caleb’s situation and applaud his choice of a project.