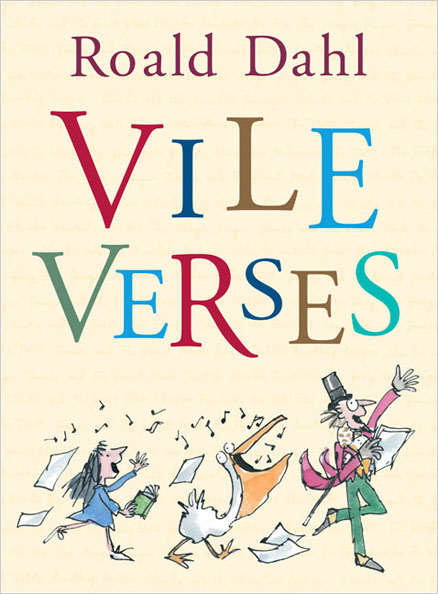 ROALD DAHL: the name is as magical, marvelous, mood-filled and memorable as this fantastic, perfectly wild and wicked introduction to his seemingly unreasoned reasonable world. This is classic Dahl and therefore a must-read for anyone interested in verse with a “scrumdiddlyumptious” twist on the turn of phrase, which alternately can provoke howls of glee amid an uneasy slow turn of spot-on recognition.

Seven themed sections of poetry are from some of his most popular books, such as Charlie and the Chocolate Factory, James and the Giant Peach, The Witches, Fantastic Mr. Fox, and Charlie and the Great Glass Elevator, plus eleven previously unpublished poems. This is indeed Dahl at his most whimsical and also devastatingly truthful as he sets the truth hilariously down between verses.

Here is a sample to whet the poetic appetite for Vile Verse. The TV-addicted Mike Teavee is gloriously skewered in “Concerning Mike Teavee”:

The most important thing we’ve learned,

So far as children are concerned,

Them near your television set—

The idiotic thing at all.

In almost every house we’ve been,

We’ve watched them gaping at the screen.

They loll and slop and lounge about,

And stare until their eyes pop out.

Posy Simmonds’s perfectly rendered illustrations are kids couched and staring, along with a pet dog, two cats and even goldfish in a bowl. They are in a mesmerized stupor, with nine sets of googley eyes robotically transfixed by a blank screen. It is funny yet nervously prescient of our times. Marshall McLuhan had it right, along with the poetic Dahl: “The medium is the message.” For all it adds, it also subtracts from time spent in more mindful activities—such as reading. Ahem, this is a word from our sponsor.

Visually, the illustrations match the verse perfectly, using a collection of artists such as Lauren Child, Lane Smith, and an especial favorite of Dahl’s, Quentin Blake, who provides the forward and opening illustration for each section.

Please dive headlong, with a child by the hand, into this visual and verbal feast of Dahl’s dictums. Everyone who opens a page of Vile Verses will relish a master storyteller and poet in full possession of his talent, with art that perfectly dovetails with the poetry, just waiting to let an eager audience begin the feast. Let your child have a wee taste and they’ll want to consume it, cover and all.