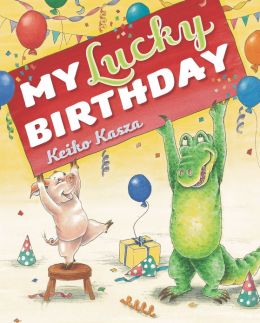 A Party with a Twist!

Who doesn’t love a birthday party? What with all the planning and the surprises that usually mark the best part of the day, who could blame the sharp-toothed Alligator Al for being the least bit boastful on his big day. He’s so looking forward to using his pearly white choppers to test out the deliciousness of a chicken or, dare he dream, a piglet!

A simultaneous knock on the door, as he mentions his favorite birthday treat, and who should be coincidentally at the WRONG house looking for the birthday party of his friend, Freddy, than a PIGLET! Wrong house and definitely wrong birthday host is Alligator Al. Al can barely contain his glee as his favorite pork tenderloin, I mean piglet, unwittingly drops into the wrong birthday party. Seems he is about to become the main dish. Or is he?

This is a piglet that is not going to go down without a fight of brains against brawn. A casual mention by piglet that NO birthday party is complete without a cake AND decorations. Hmm. Sounds logical, muses Al. I AM deserving of those amenities for my party and quicker than you can say, “Al, you’re being taken for a ride”, he is baking his own cake and decorating for his own party. Young readers will be wondering to themselves, where is this going? Will piglet escape or will he feasted upon. Never fear, young ones, this is one particularly patient piglet who is not only planning his escape bit by bit, but having a load of fun before his departure.

One thing’s missing from the party, says piglet nonchalantly. What about FRIENDS? Can you imagine Al, as he imagines a roomful of piglet’s friends gracing his table and tummy? Never assume Al, is one thing I’ve learned over time. What makes you think all piglet’s friends are of the porcine variety? Could they in fact be, oh well, for instance, let’s say just for fun, a hippo, wild boar, rhino and gorilla? And what if they’re VERY fond of piglet? The tables may quickly turn on Al and piglet may wind up the birthday party pig feted by friends. Turnabout is fair play, Al.

An invitation left on the floor of Al’s empty, but neatly tidied house post party, gives the reader the clear indication this was a preplanned birthday by piglet and not the first time he has tried this scam on unknowing birthday types. Who’ll be next? Kids will be wondering as piglet plans his NEXT party with his stuffed crocodile birthday gift, called Little Al, at his side! How entirely apropos!

Keiko Kasza has fashioned a party with a twist ending and moral that assures the reader things are not always quite what they seem. Young readers may even muster up a tiny bit of sympathy for poor Alligator Al as he not only misses his own party, but also paid for and planned it, with not quite the ending he had imagined. Ms. Kasza’s illustrations are eye catching and bright with an energetic birthday bounce; so much so that you child will want a seat at the table of this birthday party gone aright!