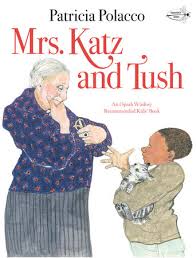 I never thought that I would be writing a blog that would say this is the Passover of the pandemic. And yet, I am, and it is.

The evening of April 8, 2020, people of the Jewish faith will begin celebrating Passover.

And for many families, this might be a extraordinarily different celebration of Passover.

The usual faces gathered around the table in years past may be absent because of social-distancing, the inability to travel and the fear that that has enveloped our world because of the current pandemic.

Isolation is the word that we hear again and again.

And isolation is the polar opposite of what denotes celebration in most cultures. Celebrations are marked by union and blending….and food.

I decided to blog on Patricia Polacco’s picture book called “Mrs Katz and Tush” because it resonated with me as it elucidates the blending of two endearing people from divergent cultures who have histories of suffering.

Sacrifice, suffering – and a gradual, hard-won ascendance are part of the dual Jewish and African-American histories.

Is it possible to blend these two cultural stories into a simply wonderful Passover story?

If your name is Patricia Polacco and you’ve had some hard won hurdles of your own as a child growing up, then overcoming hardship is a part of the literary picture book history of your own life – and a modeled resilience in the face of them.

Usually, there are some older characters in some of Ms. Polacco’s picture books that share their life experiences, and a generational wisdom gained from their own trials, with a member of the younger generation as beneficiary. I think of it as “modeling in the world what you want to see in the world.”

The sharing of generational life experience in her stories is never preachy or boring. It peaks the readers interest as it only serves to draw the two generations closer as one learns from, and informs the other – as it should be.

So it is here, with Mrs. Katz, a lonely and lovable Jewish widow, and her friendship with the young African-American, Larnel. She is in need of a friend and companionship. He provides her with both, beginning with a small cat that needs a home.

A bargain is struck..she will take the cat she names Tush, if Larnel will sign on as co-caretaker with her. Done.

And what proceeds from that, is a life long lesson in, well, LIFE. She shares with Larnel her life in Poland, her Jewish heritage, her love for her deceased hubby, Myron, and the history of the seder feast that precedes Passover.

It’s very interesting in some of Ms. Polacco’s books that families are not necessarily born of biological connections, but come about as a result of shared time and caring. I call them “families of the heart.”

Tush the cat, may be the impetus for their initial connection, but she only provides the bridge for two people of different generations AND cultures to see what they share, and everything builds from there.

I think young readers will love Mrs. Katz, her homey goodness, sprinkled liberally with small Jewish words of endearment such as bubeleh, (term of endearment ) and bubee (grandmother), plus Jewish vocabulary such as chuppa, kugel, kaddish, shalom, and matzoh.

From finding a home for a small, homeless cat named Tush, Larnel and Mrs. Katz share a wonderful friendship that grows to eventually include both his family and later Larnel’s own children. It’s funny that not just a feline named Tush is looking for a home and companionship. Humans have just as great a need here, too.

But first, Mrs. Katz and Larnel find themselves sharing a series of events that include Tush’s disappearance, rescue and a seder table. They find in each other what every one of us is looking for – acceptance and love. And something more emerges here.

I think “Mrs. Katz and Tush” may bridge religious lines of demarcation for young readers too. And I’ll tell you why I believe it to be so, with one very minute, but telling piece of evidence.

In the secondhand copy I am holding, there is an inscription that reads, “Merry Christmas to Dom and Nick from Matt and Jake.”

Bridge crossed by the sending and sharing of a book!