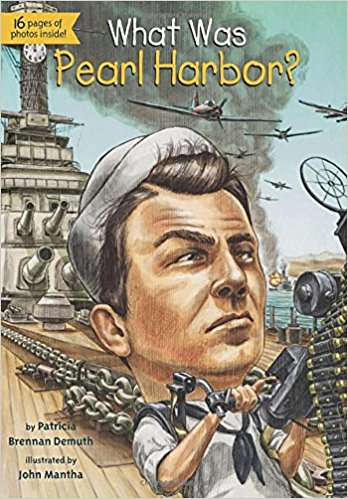 What Was Pearl Harbor? by Patricia Brennan Demuth; illustrations by John Mantha

Eighty-one years ago may seem like an eternity to a child. But, in the annals of the history of the United States, it is not all that far away.

We live in a time when historical events, especially to children, are in the land of ancient history, as the immediate pull of social media brings only the present moment front and center in their lives.

There is a quote that says “The past is history, the future is mystery and today is a gift; that’s why we call it the present.” But, many times the pull of history, and the marking of that history, in the present moment, converge. December 7, 1941 and December 7, 2022 are such days.

Education on the history of our country and the sacrifices that forged its future are an important legacy to give to the next generation. And, what better way, other than family first-hand accounts to give a front seat view of history to young readers, than through a a highly readable and researched book on a person or event in the history of the United States.

Today, December 7, 2022 marks the eighty-first year anniversary of the attack on Pearl Harbor that catapulted the United States into World War ll.

If you are unfamiliar with the “What Was” and “Who Was” series published by Penguin Workshop, as a parent or a person interested in educating the next generation of young readers on the events and people that shaped, and continue to shape our history, this series is a must read.

Here, in “What Was Pearl Harbor,”  by Patricia Brennan Demuth with illustrations by John Mantha, young readers will learn of the devastating  surprise attack by the Japanese naval and air forces on the United States base at Pearl Harbor, Hawaii on December 7, 1941. Then President Franklin Delano Roosevelt famously stood before the the United States Congress at that time and called the attack, “…a day that will live in infamy.”

Young readers will learn through sixteen pages of illustrations and Chapters entitled “This Is Not a Drill’ and “Bravery Against all Odds,” that some 2,400 lives were lost in the attack, some 1,700 wounded along with four ships sunk, including the USS Arizona that was unrecoverable, and lies underwater as a permanent memorial at Pearl Harbor to the many men that died within it.

Veterans of World War ll are passing away at the rate of about one thousand per day. Their oral histories are being collected all over the United States. Our local historical society in Southold, New York, is part of the process of collecting from veterans, through outreach to American Legion groups and other avenues, the stories of lives changed forever in the fog of war, and the bravery of ordinary Americans that found themselves at war overnight.

The famous quote from Civil War General William Tecumseh Sherman that “War is hell” is a pretty fair appraisal of what it must be like to find oneself in the midst of armed conflicts.

Young readers will discover from the pages of a book such as “What Was Pearl Harbor?” the terrible toll and price of war, but also the stunning heroics of ordinary men and women that showed uncommon valor at a pivotal point in our nation’s history.

My husband was present some years ago at a dinner honoring the living soldiers that were recipients of the Congressional Medal of Honor. One of the  men that spoke that evening was John Finn, the last living Medal of Honor recipient who was at Pearl Harbor that day, and the first recipient of the Medal of Honor awarded in World War ll.

John received the award because of his heroism on December 7, 1941.  Despite serious injury, he continued to rally others to fight and defend the island base on Oahu from the Japanese planes that were attacking. Even though he was wounded twenty -six times, he would not let himself be taken to the hospital until all of his men were treated. He died in 2010. My husband remarked that John was extremely humble, stating that he was merely doing his job that day…as were so many others. Here’s a quote from John Finn:

You gotta understand that there’s all kinds of heroes

but they never get a chance to be in a hero’s position.

Today, is a day to be remembered with hope for a better world for our children and gratitude and prayers for the people, including John Finn, that served at Pearl Harbor on December 7, 1941.