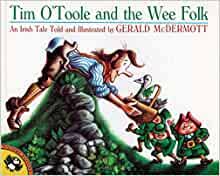 It’s The Little People in “Tim O’Toole and the Wee Folk” : An Irish Tale Told and Illustrated by Gerald McDermott

“Tim O’Toole and the Wee Folk”

An Irish Tale Told and Illustrated by Gerald McDermott

St. Patrick’s Day is right around the corner. In fact Belmar, New Jersey had its annual parade recently to honor the saint that drove the snakes out of Ireland. Not to compare this parade, though attended by tens of thousands, and a much smaller version, to its mammoth counterpart in New York, but it is an indicator of small towns throughout the country that celebrate St. Patrick and all things Irish on March 17th.

Though born in Britain, Patrick was kidnapped from his native home and held as a slave in Ireland for many years. But following his escape at about sixteen years of age, he nevertheless returned to Ireland to bring his captives, the faith.

How’s that for a lesson in forgiveness?

The Irish culture is awash in folk tales handed down in oral tradition. While families gathered around peat fires and told stories that sometimes echoed the grinding poverty and desolation that allowed deprivation to be forgotten for a moment in the closeness of family and the telling of folk tales.

These stories can definitely take you to another place when the present is difficult to understand, much less cope with. So the Irish have a rich history and penchant for the lively folk tale filled with the “little people” or leprechauns, and, whether it be for wisdom or whimsy, it’s worthwhile introducing some of these stories to your young readers come March 17th!

Meet Tim O’Toole and his bride who are “so poor they had not penny or a potato between them.” Porridge is the mainstay of their diet and even the mice that inhabit the house are thin, and their cat is too tired to chase them! Now that is poor when even the mice are thin!

Being the practical one of the family, Kate O’Toole hands Tim what for, and tells him to stop complaining and go out and find some work. Ah, but as he travels the countryside, he can find no employment, but he does hear MUSIC from a hollow nearby. Yup, it’s the “wee folk” singing away with fiddles, drums and pipes to beat the band.

Has Tim’s luck changed for the better? For it is well known in Ireland that whosoever chances upon these leprechauns in the light of day, can “demand their treasure.”

Faith and begorrah, Tim, your problems are solved. Saints be praised!

Or are they? Read on and discover how the “wee folk” are a generous lot and Tim and his bride are gifted in turn by a goose that lays golden eggs, a magic tablecloth that produces food, and a strange green hat that… (Hmm, that would be giving too much away.)

However, they are also gifted, though that is too kind a phrase in referring to this duo, with the McGoons; a pair of jealous neighbors that Tim unfortunately tells of his good fortune. The devilish McGoons (great name) employ the “ole switcheroo” con game to the kindly O’Toole husband and wife.

Will the McGoons get what’s coming to them? Will the sudden array of friends that descend on Tim and Kate in their sudden wealth, be sent packing?

Where were they before is what I want to know?

Trust the kind “wee folk” and the magic green hat to set it all aright!

Your young reader will be cheering for Tim and Kate while booing the crafty McGoons who do get their comeuppance. But I shall not say how. Read Tim O’Toole and the Wee Folk to see, in this charming folk tale, how “just desserts” are served up Irish style.