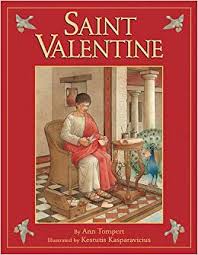 A Picture Book That Allows Young Readers to Know the Story and the Person Behind Valentine’s Day.

Just why is Valentine’s Day such a popular holiday?

And just who WAS the Valentine behind the famous phrase, “Be my valentine.”

Every February 14th, we exchange cards, flowers and other gifts of love.

Valentine lived in third century Rome during the reign of Claudius ll and was a Christian priest.

Though the actual facts of his life may have been destroyed because of “military anarchy” that allowed much of Rome’s records to be destroyed, there are LEGENDS that remain.

And I do believe that legends do contain a touch of truth.

“Saint Valentine” by Anne Tompert, with illustrations by Kestutis Kasparavicius provides a wonderful window for young readers into the life of this man called Valentine:

Saint Valentine is a mystery.

According to one legend, Valentine comforted imprisoned Christian by sending them hearts cut out of parchment.

Another legend has Valentine running into trouble with the Roman authorities after Claudius issued an edict forbidding Roman soldiers to marry. Claudius believed married men made poor soldiers because they were more loyal to their wives and children than to him.

Valentine believed the ban on military marriages was unjust. He defied the emperor and conducted secret weddings for young lovers.

Young readers will love the story of Asterius and his blind daughter.

Having been brought before Claudius for defying his orders, the emperor is taken with Valentine and wants to spare his life. Rather than condemn Valentine to death, he assigns him to the home of Asterius, a loyal lieutenant, in the hope of swaying Valentine from his Christian belief.

Asterius is a kindly military man, but soon finds that neither “the promise of wealth nor the threat of death could make Valentine worship the Roman gods.”

Prayers at the shrine of Apollo the Healer in the hope of returning his daughter’s sight are in vain.

According to legend, Valentine prayed that her sight might be restored to her and a bright light filled the room and “the girl was given the gift of sight.”

Asterius was amazed. He was convinced that Valentine’s one god was more powerful than all the Roman gods put together. Valentine spent many hours speaking of the life of Christ and Christian beliefs. In time, Valentine baptized Asterius, his family and his servants and slaves.

Upon hearing of this, Claudius did not allow Valentine to be spared.

Tradition tells that on February 14th around the year 270 A.D. Valentine was taken to the Flaminian Gate, on the road running north of Rome and beheaded. It became known as Valentine’s Gate and later, the People’s Gate.

An almond tree which is a symbol of love and friendship was planted near Valentine’s grave. It continued to blossom for many year on February 14th.

“Booklist” selected “Saint Patrick” as one of the top ten religious books for children in 1998.

Kestutis Kasparavicius ( what a lordly name) has illustrated more than thirty children’s books, including Ms. Tompert’s “The Pied Piper of Peru.”

In 1993, he was honored as “Illustrator of the Year” by the Bologna Book Fair, and his illustrations have been selected for the fair’s exhibition some nine times.

Here, his paintings are beautifully rendered and the touches of red in Valentine’s toga, Asterius’ Roman military tunic and those of the guards that escort him are wonderfully evocative of both the power of love and the sacrifices it sometimes necessitates.

The soft and subtle hints of red in the flowering almond tree with two turtle doves nestled beneath its branches with a pale pink, tiny cut out of a heart amid the crumbled ruins of Roman marble walls, are perhaps are a reminder to the reader of what lasts and what remains.

Amid the candy, cards and flowers that fill February 14, 2021, perhaps take a moment and allow your young readers a peek into the past of the man behind the holiday.

And, Snuggery readers, my younger brother’s name happens to be Val, too!