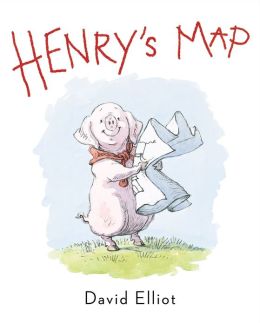 My mom would have been a big fan of Henry the Pig whose motto is “A place for everything and everything in its place.” My mom’s directive to those running around frantically looking for a misplaced item was to nod sagely and say “Put things where they belong and you’ll always find them.” Gets them every time! She and Henry would most definitely have been great pals.

Contrary to the typical image of the pig, Henry is a neatnik. His sty is a thing of beauty. All is tidy and clean, but as Henry gazes out his window and surveys the farm, he determines all is not as it should be. “What a mess the farm was”, observes Henry. And this leads to an initially fun-filled map creation of the farm, directed by Henry of course.

The animals enthusiastically cheer Henry’s attempts to put everything in its place as he maps out the entire farm and its inhabitants – cow, horse, sheep, chickens, and, of course, Henry!

Mapping the farm out is no problem. But as the animals, Maisy, Daisy, Clementine, the sheep, Abigail the cow, Mr. Brown, the horse, and a troop of chickens, gather on a hilltop to survey the map neatly plotted out and compare it to the buildings, one thing is missing of course. And the distressed animals immediately note the difference between the map and a real farm. They’re missing. As the animals gaze at the buildings, they do not see themselves as they appear on Henry’s map – only the structures sit in solitary silence as seen from the hilltop. A quick glance at the map and the animals are confounded! We’re not there! And of course they go charging down the hill to fill in the blanks of Henry’s map.

There is a simple wisdom in David Elliot’s book that children will get and that is that a farm is not a farm without the inhabitants that make it so. It’s sort of the same philosophy as the feeling present in the quote, “A house is not a home” without the people to fill it with life and love. Life is messy sometimes. You have to break an egg to make an omelet as they say. Life cannot always be mapped out so completely – for humans and animals have the unpredictable, crazy quilt quotient that makes it real! Henry’s image reflected back to him in the mirror on the wall of his spotless sty says the same thing to him.

Henry finds it’s that complex and that simple. And so will your young reader.

Preorder your copy today!  This book goes on sale on June 27.