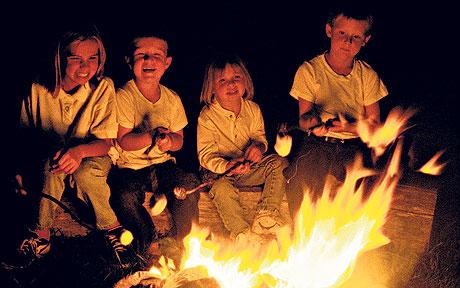 Plug into Your Family!

This may just be my favorite time of year. In my head, I return to streets filled with leaves raked into big piles by adults, lit afire and then crowds of kids hunched shoulder to shoulder holding marshmallows poked onto thin tree branches in hand. Spirals of smoke went skyward as we and the marshmallows toasted to a golden brown – or sometimes, outright BURNED. As the huge piles turned to small nests of ash, we trudged home, our clothes reeking of smoke – but with smiles on our faces. Those leaf burnings are no longer allowed because of the environmental impact, but they sure were fun.

I saw an ad recently. It showed a family gathered about, each with his or her own technology device and the caption read, “The modern family is plugged in.” It sort of begged the question – to what and to whom?

First, let me begin by saying, I am NOT anti technology. Smart phones, ipads and their offspring have their place in our culture. They provide vehicles for communication, information and reading, unheard of in MY childhood. What concerned me was the image of a family, their heads and eyes, COMPLETELY captured by the device and NOT each other! To what degree are we completely engaged with devices and NOT with the people that share our lives.

True, there are many ways of sharing and communicating. And to that end, a young father recently piqued my interest in a big way, as he inspired me with the way HE shares and communicates with his two young children. They share something called “Campfire Fridays.” It’s a great idea!

This is how it goes. On Fridays, they sit around a campfire with each other, outside – or in – and share the week. They swap stories, events and happenings that occurred to each during the week. S’mores and similar edibles are added to the mix. But the important thing is they are plugged in, for that space of time, TO EACH OTHER.

Amazing things can happen in such a space. Barriers fall that separate us over our busy fast forward lives and for that amount of time – we can unite over hot chocolate, a s’more and a story. Kids love ritual and traditions. When crummy things happen during their week, their minds go to the small event at the end of the week that can make whatever happened loom not so large. Why? Maybe because it is shared with those that love and support them. And THAT can make a big difference for kids.

Maybe meals are not shared every night in many families today because of cobbled together schedules of extra curricular commitments, but hey, what about a “Campfire Friday?” I guess my version of Campfire Friday were those leaf burning rituals that I so looked forward to.

May I suggest during picture perfect fall Fridays left to families everywhere, that you plug into each other and unplug the devices? As batteries run down on a device and need to be recharged, so too does the energy surrounding the quality of our family life and relationships. Please plug in to each other with a Campfire Friday and a book!!

Here are a just a few suggestions to read around a campfire or a cozy chair pre Halloween:

“The Runaway Mummy: A Petrifying Parody” by Michael Rex