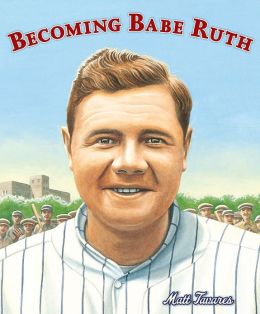 The World Series Is Here…and So Is a Great Picture Book!

I guess the reason I enjoyed reading this book about the life of the iconic baseball figure, Babe Ruth, was mainly because of its title. It says a great deal to children in a simple phrase and its use of the word “becoming” is very telling in itself. In addition I think the art work is very warm and emotional in that it has a real “feel” for portraying the beginnings of the life of the Babe, the big moments AND the giving back for which he was known.

No one becomes who they are “alone” – not even world class baseball idols like Babe Ruth. Even his name, “Babe” was given him by teammates, who after his hire by Jack Dunn of the Baltimore Orioles, said, “He’s one of Jack Dunn’s new babes” – shorthand for a newbie.

Babe’s early life seemed destined for trouble. Stealing, skipping school and roaming the streets filled his days until his parents, at seven years of age, take him to the St. Mary’s Industrial School for Boys on June 13, 1902. He begs for another chance, but unbeknownst to George Herman Ruth, THIS is his chance!

School seems an endless routine of church, class, work and rule following. Rule following and classes are his least favorite things. And he is homesick.

One pursuit at the school sparks his interest – baseball. A Brother Matthias can hit the heck out of the ball, over the school yard fence, not once, but again and again.

George is mesmerized. He has found his passion and his mentor. He will play in 200 games a year at the school, even in winter.

Brother Matthias teaches him how to throw a curveball, how to turn a double play, how to get a runner off at first. He learns EVERY position on the field including catcher and shortstop.

At 16, George is the biggest boy on the team – and the best. Soon he has caught the eye of Jack Dunn, owner of the minor league, Baltimore Orioles and after watching him for a 30 minute pitching demo, Jack offers the 16 year old a contract.

Two weeks later, suitcase in hand, he leaves St. Mary’s for the outside world. Newspapers start calling him “Babe Ruth” after the nickname given him by his teammates.

From the Baltimore Orioles to the Boston Red Sox where he becomes the best pitcher in baseball, his team wins the World Series in 1915, 1916 and 1918. Then, it’s to the New York Yankees and signed for an unheard of $125,000 paid for his contract, the largest sum EVER paid at that time for a baseball player.

Babe is a celebrity living the high life. But he never forgets his early start at St. Mary’s. He breaks the single-season home-run record halfway through his first season with the Yankees. Babe is dubbed “The Batterer”, “The Colossus” and “The Sultan of Swat.”

Here comes the part of the book I love and I hope kid and parents will too. St. Mary’s is demolished by a raging fire. It has all but been destroyed, but Babe has an idea. Writing a letter to Brother Matthias, Babe invites the 50 piece school band to join him “on the road” and come along with the New York Yankees on a road trip. Could you see kids reading this and imaging the thrill of such an opportunity today?

The 50 boys go to all the games and before each game, play a concert in the stands. They are called “Babe Ruth’s Boy Band” and the huge crowds attending the game are eager to contribute to the rebuilding of St. Mary’s – and they do!

And he returns to the Big Yard at the rebuilt school where he saw Brother Matthias smack the ball over the big trees again and again. But this time, The Babe does the same thing for the boys.

Matt Tavares has written a historically accurate picture of a baseball icon and honed in on one small event in a historic baseball career. BUT, he has managed to achieve more than that in “Becoming Babe Ruth.” In his “Author’s Note”, Matt states that even the seemingly superhuman Babe Ruth needed help along his journey to greatness. He needed role models that cared, along with a ton of support and guidance.

And even after his fairy tale rise to stardom, he never forgot the shoulders that he had stood on to achieve his goals – or even forming the idea of a goal to be reached.

Much has been written in eastern papers of late of the Yankee captain, Derek Jeter. His   career that has recently come to a close has served as a role model of dogged determination for excellence, along with a scandal free personal life, topped off by a final game that was magical in which all the stars seemed to align.

Yet, the character and performance of Babe Ruth still stands out in its greatness, despite the weaknesses that showed themselves in his later adult life. His athletic achievement stood out, but what is remarkable is his eagerness never to forget what formed him. He wanted to provide hope for kids in orphanages, reform schools and hospitals, telling young ones that they too could achieve something in life – that good things are possible even with a rocky start.

“Becoming Babe Ruth” is a great picture book in this “play off” season to remind kids what is possible in baseball – and life, even when you’re down in the 9th inning AND bases are loaded.