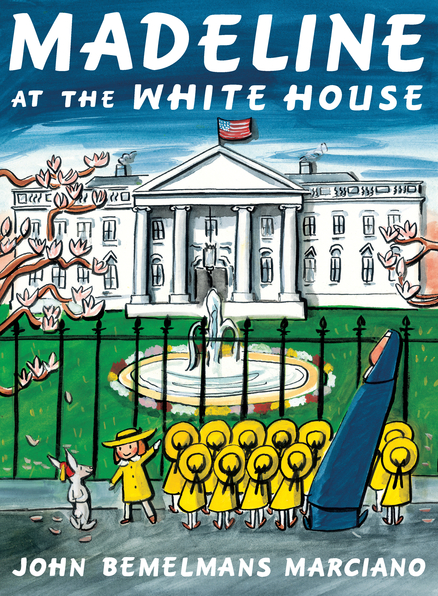 “Madeline at the White House” by Ludwig Bemelmans Marciano

A friend recently gifted me with a special piece of literature from a retrospective called “Madeline at 75 ; The Art of Ludwig Bemelmans” that appeared at the Eric Carle Museum of Picture Book Art at Amherst, Massachusetts from November 15, 2014 – February 22, 2015.

It immediately reminded me of the talents of both art and narrative that combined for picture book readers held in their thrall by the diminutive, but plucky French heroine created by Ludwig Bemelmans, and named Madeline.

And that gift lead to this posting.

In background notes to Madeline at the White House by John Bemelmans Marciano, we discover the grandfather of Mr. Marciano, Ludwig Bemelmans, the creator of the Madeline series, had a friendship with the former First Lady, Jacqueline Kennedy.

In a series of letters in 1961 and 1962, inquiries were made about the possibility of a book entitled Madeline meets Caroline, with text to be provided by Mrs. Kennedy. What a terrific idea for a book this would have been! That book unfortunately never came to fruition. But luckily Madeline at the White House has.

In it, Miss Penelope Randall, called Candle, resides as a lonely young girl at 1600 Pennsylvania Ave. Called Candle because of a stubborn curl that bobs above her head like a flame, she is in desperate need of companionship. Witness the canceled appointments to see her father and an absentee mother, which make her a very lonely first child indeed. To add to her isolation, Secret Service Agent Downs keeps a sharp eye! She never leaves the White House! What is a first young lady to do? Luckily a letter arrives par avion from Paris announcing the arrival of the daughter and classmates of a very good friend of the First Lady’s. Guess who…it’s the “twelve little girls in two straight lines,” with Madeline leading the group in mischief, of course, accompanied by the always-in-charge and no-nonsense Miss Clavel.

The traditional White House Easter Egg Hunt and Egg Roll culminates in a pajama party with Madeline’s rabbit-disguised magician, creating a cherry blossom-trailing carpet ride for Candle and Madeline, sweeping them into a starry night tour of the Washington the first daughter has never been allowed to see.