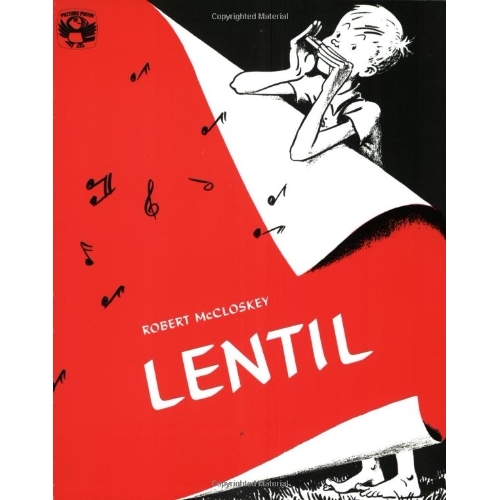 Yes, it’s the same author of Make Way for Ducklings, One Morning in Maine, Time of Wonder, and Blueberries for Sal, many of which take place in Maine. But just maybe your young reader missed not only these, but another peek at a slower pace of childhood in Lentil!

Mr. McCloskey grew up in Ohio, so it’s not unusual that this picture book is set in a place called Alto, Ohio wherein lives a lad named Lentil.

It’s a happy life in Alto, save one glitch: Lentil wants to sing and can’t. Can’t sing and can’t even whistle, so what to do? Why buy a harmonica of course!

Pennies saved buys the longed for harmonica and Lentil plays early and often with the best sound reverb coming from playing in his bathtub! Most everyone enjoys the sounds emanating from Lentil’s harmonica, save for OLD SNEEP. Don’t you just love the oily sound of that name? You don’t even have to LOOK at Mr. McCloskey’s perfect black and white drawings to figure out what kind of character ole Sneep will turn out to be. Why, he’s a veritable grump of course, and a wood whittling, park bench-sitting grump at that.

News spreads fast in small towns and the famous Colonel Carter, one of Alto’s most favored citizens, is descending after two years away. He owns the finest house in Alto and the library was a gift from the Colonel. Everyone is excited except Old Sneep:

“Humph! We wuz boys together. He ain’t

A mite better’n you or me and he needs

(Good time for an introduction by the reader on the whys and wherefore of dialect allowances.)

So, Alto plans a big celebration for the Colonel with crowds, flags flying, speeches AND the Alto band set to play as he exits the train. BUT ole Sneep, jealous of the Colonel’s celebrity, is the fly in the ointment, and commences slurping a LEMON from the roof of the train station as the band puts lips to instruments. Talk about being unable to wet your whistle, all the band mates can do is pucker rather than play because of the slurping sound of ole Sneep!

But guess who knows a nifty version of “Comin’ Round the Mountain When She Comes?” Soon the Colonel is finger snapping and singing. And he even joins in on a chorus or two with Lentil’s harmonica, as it seems the Colonel played one as a child! In fact the Colonel is so happy about the bang up welcome he received, he’s going to build a HOSPITAL for ALTO. Even ole Sneep is so happy he can be seen indulging in an ice cream cone to celebrate the occasion.

Mr. McCloskey has a gift for portraying the large heart within a small town like Alto or a big city like Boston in “Make Way for Ducklings.” His art and words make people and places VERY ACCESSIBLE to your child whether they’ve been there or not. Don’t let the sounds of Lentil’s harmonica, the Colonel, Sneep and the good people of Alto elude your young reader’s ears.

It is childhood at its simplest and community with all the shadings of gray and a great heart at the center!!