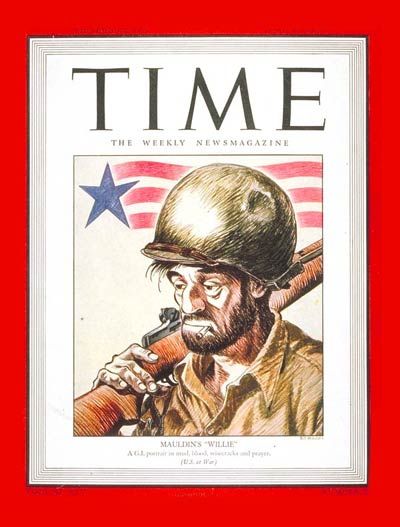 Getting Ready to Honor Memorial Day

This Memorial Day you may be wondering why I am shining The Snuggery spotlight on a particular enlistee named Bill Mauldin from World War ll. There were millions of men that enlisted and served.

But this particular one is a two-time Pulitzer Prize winning editorial cartoonist who was honored with a United States postage stamp issued in 2010 depicting this baby faced GI right alongside his two famous cartoon creations, named “Willie and Joe.”

Even the Commander of the European Theater of Operations during WW ll, one General Dwight D. Eisenhower was a big fan, though another famous general named Patton, wanted to tone down the grittiness and accuracy of Mauldin’s praiseworthy portrayal of men at war.

Eisenhower won that debate, of course, with the terse words, “Mauldin draws what Mauldin wants.”

With the cartoons that appeared in the military magazine called “Stars and Stripes,” Mauldin, a young cartoonist, showed his two cartoon buddies, named Willie and Joe, amid the muddy weariness and casual heroics that were part of the reality of the everyday infantryman’s life in WW ll.

And the GI’s loved both the cartoons, and the artist because he was one of them. He was an enlisted man just like they were, showing, through his cartoons, their lives on the front lines of battle.

As I mentioned, Maudlin got literal flack from General Patton who wanted the celebration of the average GI Joe toned down, with less laughs in Maudlin’s cartoons that were pointedly directed, at times, at the cost of the officers in charge.

No go, said General Eisenhower, as I referenced above, with his famous quote on the subject.

This Memorial Day, please have a look at the black and white drawings that lifted the lives of men on the front lines via a cartoonist named Bill Mauldin.

Other iconic renderings of Bill Mauldin include his depiction of Lincoln’s figure at the Lincoln Memorial, bent over with head in hands, following the assassination of President John F. Kennedy in 1963.

Please allow your child a peek into a cartoon world like no other; the world of former GI, Bill Mauldin.

He is buried at Arlington National Cemetery.

I hope we continue to see such cartoon lampooning of figures in our culture, both military and civilian, that perhaps need a poke or two with the pen of someone with the equal honesty of a cartoonist like Bill Maudlin.

And along with those pokes, may we see an equal and honest bit of honor, in cartoon form, accorded to the men and women in the front lines who around the world both stand and serve in defense of our country.