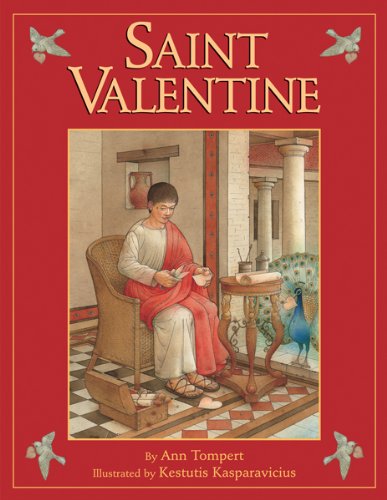 The National Retail Federation polled some 6,000 odd consumers to see how much they will spend on Valentine’s Day. Traditionally, this is the day to celebrate L O V E with special dinners, flowers, cards and candy, not to mention proposals of marriage. Americans spend some $17.3 billion for the day. An additional survey by the American Express Spending and Saving Tracker, put that figure more in the area of oh, some $37 billion, that’s billion, with a colossal B!

So just who was this Valentine that precipitated this lovey dovey day we commemorate each year on the 14th of February?

Does anyone remember him and what he did? I was curious, and so I wanted to learn a bit more, and think that I’ve found a picture book whose art and narrative does justice to this man of love.

Kestutis Kasparavicius, honored by the Bologna Book Fair in 1993 as “Illustrator of the Year” is the person chosen to portray Saint Valentine’s life and legend in this picture book portrayal of this initiator of tokens of affection.

Author Ann Tompert has, in fact, written about others such as St. Nicholas, Joan of Arc, and her book on St. Patrick was selected by “Booklist” as one of the top ten religious books for children in 1998. She also has notable titles such as “Grandfather Tang’s Story”, a Notable Children’s Trade Book in the fields of Social Studies and Language Arts.

But what happened to Valentine? As I mentioned Ms. Tompert presents here a selection of woven together stories about Valentine who seems a bit of a mystery. “Ah! Sweet mystery of life, at last I’ve found you” croons Victor Herbert’s song in my head. And, it somehow all fits, right? Makes perfect sense to me that Valentine himself would be a man of mystery.

We do know he was born near there in the 3rd century A.D. It is known he was a Christian priest during the reign of Claudius II. The rest gets a little murky and legends abound which is where this book takes off beautifully.

Valentine and fellow Christians are persecuted for their faith and are forced to meet secretly in shops, homes and caves in the hills of Rome.

Legend has it that Valentine cut out of parchment, comforting hearts to send to the Christians being held in prison. That’s where the card idea emerged!

Another legend has Valentine performing marriages for military men. Rome apparently banned marriages for them because it wanted to insure undivided loyalty to Rome, instead of a wife and children! Valentine, as I said, conducted these secret marriages.

Valentine even wins the admiration of the emperor, Claudius II himself after Valentine is tossed into prison. Apparently his graceful speech won him over!

My favorite story is the one about Asterius, a Roman lieutenant that has a blind daughter. Relief is sought from the Roman god Apollo and eminent doctors of the time – to little avail. The legend says a bright light filled the young girl’s room after Valentine prayed for her. Asterius and his entire family, servants and slaves are baptized because of the healing.

Claudius is not happy at the news and sentences Valentine to death – and this time he is not spared.

The date is February 14th around 270 A.D. outside the Flaminian Gate where Valentine is put to death.

Did you know it was then referred to as Valentine’s Gate and later the People’s Gate?

Near the gate, a almond tree, symbol of love and friendship was planted near Valentine’s grave.

And guess what? It bloomed for many years on February 14!

Finally, what could be more perfect? Both my grandfather and brother are named Val!