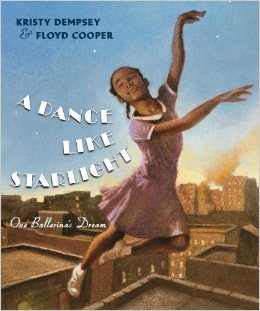 Every Reality Starts with a Dream!

By Kristy Cooper and Floyd Cooper

When I read this book, it made the opening lyrics from a song from the musical “South Pacific” pop into my head. The song is called “Happy Talk” and the lyrics are:

You got to have a dream,

If you don’t have a dream,

How you gonna have a dream come true?

Well, every reality has to start with a dream, a hope built on possibilities, and in A Dance like Starlight, the hope and dream is in the heart of a young black girl growing up in the Harlem of the 1950’s. Her mom is employed in a ballet school, cleaning and sewing costumes for the company of professional dancers. While her mom works and hopes for something better for her daughter, the young girl dreams of someday becoming a prima ballerina. As she mimics jetes and pirouettes when accompanying her mother to work, the Ballet Master at the ballet company notices her natural talent. Arrangements are made for her to join in daily lessons and a journey of possibilities begins.

Hope and talent must be matched with hard work, realizing she will be not permitted to perform with the white girls on stage; she can still do other things to realize her dream:

Every class I try harder

But a question in her mind is left unanswered – for a while. “Could a colored girl like me ever become a prima ballerina?”

Kristy Dempsey, a poet, writer and librarian living in Brazil and Floyd Cooper, recipient of a Coretta Scott King Award for his illustrations in Brown Honey in Broomwheat Tea and I Have Heard Of a Land, provide the answer to her question by way of a role model.

The young would-be prima ballerina accompanies her mother to the Metropolitan Opera House to see Miss Janet Collins perform, the first black prima ballerina hired by the Met in 1951! And Floyd Cooper’s illustrations convey the full import and emotion of the moment for this young girl as she watches Ms. Collins on stage. The illustrations wonderfully show BOTH black dancers on stage in performance in a dreamy sequence. Ms. Collins is the older maturation of one dream and the younger girl, who sees herself in sync right next to the role model prima ballerina’s movements, is the beginning of another dream, made possible by the first. Amazing!

Sometimes perhaps we forget how important role models are to the young. Could Halle Berry, Whoopi Goldberg, Jennifer Hudson, Mo’Nique, or Octavia Spencer have dreamed of achieving an Academy Award if Hattie McDaniel had not paved the way for their realization of what is possible with her win in 1939 in Gone With the Wind? Maybe talent will out in the end, BUT in A Dance Like Starlight, the sure belief is reinforced to young picture book readers that they stand on the shoulders of those who have come before them. And like both the North Star, and role models, they can point the way!