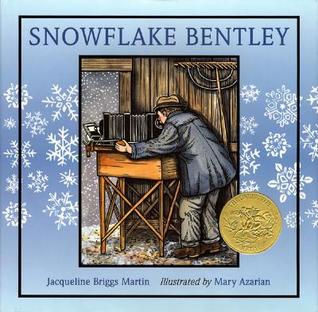 A Snowy Book for a Snowy Winter!

In these cold and dreary February days, I have the perfect picture book to perk up your young reader’s interest. At their age, who doesn’t long for “snow days” when school is called off and kids can spend time scudding down slopes on sleds or packing balls full of ice crystals called snow.

Please introduce your young reader to this Caldecott Award winner of 1999 if you enjoy days like this.

For you’ll both meet one Wilson Bentley, also known as Willie, who came into this world on February 9, 1865 and was born into the town of Jericho, Vermont where 120 inches of snow fell each year! Really? Really. The adage “Snow in Vermont is as common as dirt”, might have been a deterrent to learning about something so everyday, but not to young Wilson. In fact, he came to be known, as “the Snowflake” Man because of his continuing efforts to capture a picture of the lacy beauties. In fact for anyone beginning a journey of finding out more about snowflakes, you’re most likely to start with his book, Snow Crystals, which built his reputation as the world’s expert on snow!

What caused this consuming curiosity at such a young age? His joy was in showing the things of nature to his brother and mother; things like butterflies and apple blossoms. But when it came to sharing his favorite thing, a snowflake, they melted on his mitten in a wink before he could share them with those he loved. How to save a snowflake! This was a definite puzzlement to a young boy, but not insurmountable.

With an old microscope given him by his mother, he was catching single snowflakes and studying the crystals. What he thought he’d find would be whole flakes that were copies of each other. Nope. No two were alike. For three winters he drew hundreds of the crystals, but they always melted before he could complete the sketch! But he did learn that most of them had six branches, with some having three. “I found that snowflakes were masterpieces of design. No design was ever repeated. When a snowflake melted…just that much beauty was gone, without leaving any record behind.” And he meant to do something about it and did.

At sixteen, he learned of a camera, a very expensive one, which had a microscope attached! Why with that, he could actually photograph the beauties and share what he’d seen! May seem foolish to some, but his parents spent their savings and bought him the camera! Through trial and error he figured it out. Just like batches of cookies that don’t quite turn out right, some were good and some not. Some winters he made hundreds of photographs and other winters he made a few dozen.

Wilson gave copies away or sold them for a few cents. Some evenings in the summer, he’d put an old white sheet over a clothesline and project his slides of the flakes so people could see.

Colleges and universities bought slide copies of his photographs and added to them each year. His photographs inspired artists and designers in their work.

For instance, I just came back from skiing out west and there were many hand-designed pieces of jewelry with exquisitely detailed snowflake designs, and each different, just like the ones “Snowflake” Bentley saw. And I thought of him.

Mary Azarian’s woodcuts provide the perfect illustrations for Ms. Martin’s book. As Kirkus Reviews rightly stated, they are a “perfect match, rich earthy and of good cheer.” They add immensely to the telling of the story for they provide just the right touch and feeling of a wholesome hardiness of times gone by. And how coincidental, but Ms. Azarian lives but an hour away from the town of Jericho, Vermont where “Snowflake” Bentley lived and wonderfully managed, through her woodcuts, to capture the feel of farm life in Jericho!

Forty years after his passing, this man who by 1926 had spent $15,000 on his work, had recouped but $4,000 of the dollars spent. He never attained wealth as all his money went for pictures, though other scientists raised money to help his research to be collected in a book that was published.

“I can’t afford to miss a single snowstorm”, he told a friend. “I never know when I will find some wonderful prize.”

In the center of his town, a monument was built for him. And the children in his village, recognizing this extraordinary man in love with snowflakes, worked to set up a museum for him.

The plaque on the green reads in part:

If you’re ever in Jericho, Vermont, stop by to visit the plaque with your children or better yet, listen to the words of “Snowflake” himself who compared his work to the dairy farmer who rises at dawn to see that people get their milk each day:

“Because I do this I can show these lovely things to people who would never have seen them with-out my help. They will get their daily quart of milk all right. Other farmers will attend to that. But I think I am giving them something which is just as important.”