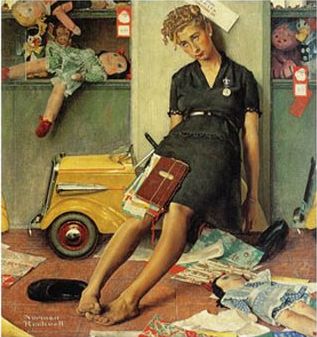 May is for Remembering!

As I began my May blog, I started to think about the two special days ahead in May and how they might be linked; the word “remembrance” was in the forefront of my head and it wouldn’t leave.

Certainly remembrance as it relates to mothers is not that much of a leap. I kept thinking of the famous quote by Lincoln: “All that I am, or hope to be, I owe to my angel mother.” Many of my readers would agree with his quote wholeheartedly, I’m sure. This blog will end with a sort of double literary testament or salute to the sometimes invisible among us—moms everywhere living or dead and also the soldiers who fought to defend the liberties we sometimes take for granted, such as the right to express my opinions in a blog. It’s certainly not meant to detract from the contributions of fathers everywhere in the formation and nurturing of their offspring. On the contrary, their position is solid in the pantheon of the selfless as far as I’m concerned.

I received an email from a friend recently. It was the partial impetus for this blog. It was called “The Invisible Mother”.

So just for this particular moment in time, I want to recognize the moms who sometimes feel they are invisible as they strive mightily to do the near impossible each and everyday. They are, in many cases, the single support systems allowing households to run smoothly, softening rough edges with transport supplied from one place to another, overseeing homework, listening to hurts of the heart, nursing all manner of cuts and bruises, providing clean clothes, making meals, keeping doctor’s appointments for braces, assorted ills, or the routine check up and, most importantly, providing love and guidance in abundance. For the most part, these herculean multi-taskers, with many holding down full time jobs, juggle it all with grace, wit and selflessness. For some strange reason in our culture, if one is not compensated for something, it is not considered as valued or on an equal par with one receiving a salary. As proof, ask any woman who has put down volunteer work on a resume. Hence the great divide between the stay at home mom and the mom who opts to work, or for financial constraints, must work. I believe EVERY mom is a “working mom”, whether she works inside or outside the home or both. So, give yourselves a hearty round of applause, moms. So much has been written, sung, and rhymed about you, I wanted to add my two cents of praise and later, prose, in your honor, with the works of children’s authors who articulate the world of motherhood far better than I. Happy Mother’s Day!

The second, sometimes invisible group recognized in May, are our honored war dead. On Memorial Day, it seems the original intent at its outset was the decorating of graves of Union and Confederate soldiers. It was begun by one General John Logan, but seems to have gotten lost in the shuffle of the present three-day Memorial Day weekend. Officially proclaimed by General Logan on May 5, 1868 for the express purpose of honoring the Civil War dead at Arlington National Cemetery, its original intent appears to have to begun to drift a bit of late.

Congress, in 1971 passed the National Holiday Act instituting the three-day weekend and the long slide began. From a holiday begun to decorate the graves of our honored war dead, it appears to have devolved into a series of white sales. Too harsh, you say? Maybe. But memory is a funny thing. We humans seem to have short attention spans, and at times, shorter memories.

But thank goodness books have a way of touching both the heart and the head, where a set of dry facts and dates distance us from the reality of the flesh and blood people we choose to honor on these two important holidays. Literature does that for children and adults alike. Share some of these books I will mention with your child and talk about why remembrance is so important. Someone once said to me—”So long as a person’s name is spoken, so long will they live in remembrance.” Why not relate an anecdote of a mother or mother figure to your child this month, along with the story of a veteran. Children love stories. They make people come alive again in the mind of a child and reinforce their importance. Because the stories are important to you, they will be to them, trust me. Books and the stories they contain have an amazing capacity to bring people and events richly alive. Tradition is how we pass on to our children what we value and these two holidays are in remembrance of some pretty important people in each of our lives and in the life of our nation.

One of my pastimes is collecting vintage children’s books. This excerpt from a series with a 1915 copyright, titled “Peter and Polly in Spring” may be dated, but it has a reality and sweetness of a time long gone. Written by Rose Lucia, principal at the time of the Primary School in Montpelier, Vermont, each of the books recounts the seasons of the year and a group of children’s everyday activities within that season. This simple evocative quote is a testament to how literature can recreate a feeling of time and place within a few brief sentences. Miss Barnes, the children’s teacher accompanies them on the morning of Decoration Day, the name formerly given to Memorial Day.

It was a long walk to the cemetery. The road was dusty.
The sun was hot. But the children did not care.
They liked to go once a year, to decorate the soldiers’ graves.
…………
So the children went down the road to the village. And the
The cemetery was quiet as before.

Only now there were fresh flowers on the soldiers’ graves.
And the new flags fluttered in the wind. They were for
remembrance.

I guess it’s why I am so happy this May and every May hereafter to celebrate with a book, poem, and yes, the traditional flowers, the sometimes invisible among us—who kept, and keep the cradle rocking and those who chose to defend it.