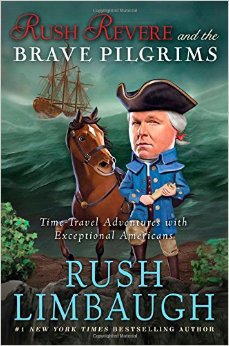 Take a Ride this Thanksgiving!

Can we put politics aside for just a bit? I know we’re in the middle of some pretty ferocious back and forth gotchas in the take no prisoners arena, that I like to call the pitched battle of politics.

But, whatever your political persuasion, if you can put that aside for a bit in favor of reading, here is a book, author name aside, designed for older young readers and even parents, that I think deserves a look and a read by both.

Make your own decision on this New York Times Best Seller and 2013 Children’s Choice Book Award “Author of the Year”, and see if you can see past the name that makes some see red. Names, dates and places are not in question here, as some reviewers have stated from Booklist, but according to them, the context is.

That, I think needs to be judged by the reader, and not judged by only reviews, although I suppose that is exactly what a book reviewer’s task accomplishes to some degree.

You will meet substitute teacher, Rush Revere and his time traveling horse, Liberty. With the aid of Liberty’s amazing sci-fi ability, and, accompanied by some lucky and initially disbelieving youngsters, they step back to eventful times in our nation’s history, with Liberty as their means of time travel conveyance.

With the aid of modern technology, unfathomable in the Pilgrim world of Plymouth Rock, Rush and his young partners, via his smartphone, after meeting and greeting firsthand these amazing stalwarts of American history, all return to modern day, the richer for their first hand experiences with historical events and persons.

Mr. Limbaugh has done his research. And your young reader will get a pretty fleshed out, no mere snapshot view of the events of the Pilgrim voyage as it left England, the unbelievably arduous journey encountered, along with names and stories of some of the 102 people aboard The Mayflower. And the second ship, The Speedwell, perhaps a victim of sabotage by its crew and hampered with a leak, returns to Southampton, England.

And there were no hotels or restaurants greeting these tired travelers as they landed in a strange land. No, ma’am! They were not put up for the night at the local B and B. Maybe that is the part of this huge risk taking journey that our children may need to glean a better sense of, since it is probably so far afield of their own day to day – for the most part.

It was literally carving a nation out of a wilderness with the help and guidance of some pretty remarkable Wampanoag Indians. Samoset served as initial introducer to Chief Massasoit with Squanto acting as interpreter.

Maybe taking kids camping out in the woods for a weekend and pitching tents and cooking camp side is perhaps the closest approximation to a semblance of the lack of conveniences that these people endured in1620.

And even then, relief from cold and hunger is a mere rest stop away, right?

These Indians become in “Rush Revere and the Brave Pilgrims”, not card board cutouts in a play, but as readers page through, they will get a genuine feel for the Indians selfless gift of sharing long held knowledge of growing techniques with these struggling strangers in a strange land.

With William Bradford guiding the new colony, things are tough and tremendously tiring for the new arrivals, but they gut it out through the hardship of winter’s freezing temps and diseases that beset the group.

To say more would ruin the adventure of discovery for your young reader.

Suffice to say, their grand experiment, fraught with huge risk, was a success, despite the sad loss of life.

They will learn of the Mayflower Compact signed by colonists before they even debark at Cape Cod, blown there and farther north from their original target of Virginia.

They will learn of the formation of this Mayflower Compact; an agreement for all the colonists that, unfortunately, did have some “working” glitches after it was signed. But each and every obstacle is met and matched with bravery and, sometimes, sheer brawn. The Mayflower Compact signed by Puritans, adventurers and tradesmen and created on November 20, 1620, was important because it was the first document to establish self-govern- ment in the New World. It was originally titled “Agreement Between the Settlers of the New World.”

Governor Calvin Coolidge had this to say about it at the 300th Anniversary of the Mayflower landing. And yes, he did become President a few years later:

The compact which they signed was an event of the greatest importance. It was the foundation of liberty based on law and order, and that tradition has been steadily upheld. They drew up a form of government which has been designated as the first real constitution of modern times. It was democratic, an acknowledgement of liberty under law and order and the giving to each person the right to participate in the government while they promised to be obedient to the laws.

But the really wonderful thing was that they had the power and strength of character to abide by it and live by it from that day to this. Some governments are better than others. But any form of government is better than anarchy, and any attempt to tear down government is an attempt to wreck civilization.

Please let your young reader sample this “ time travel trip into history” with Rush and Liberty.

It’s worth the ride this Thanksgiving!