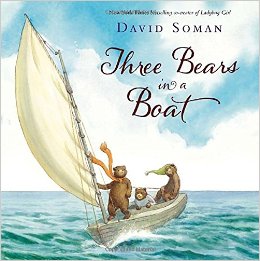 Three Bears in a Boat

Three seems to be the magic number for bears when it comes to adventure, whether it involves a gal named Goldilocks, a famous home intruder, or here, in David Soman’s salty sea tale of losing and finding.

But here, in Three Bears in a Boat, is an adventure piloted by Mr. Soman solo, and it steers true north to a great story featuring  some pretty young winsome and wooly bears that model “bear behaviors” that both kids and parents may pretty quickly recognize as very human.

Think mischief while Mama bear is away. Think broken treasured blue seashell. Think young bears ruminating… How do we get out of this without Mama Bear finding out?

And Mr. Soman has found the formula for a fascinating bear sea saga that comes full circle… back home. The stops along the way are the best part in any story, and the stops here are magical.

The imaginative folk that the salty bears at sea meet and greet are funny, fierce and founts of wisdom.

Be you bruin or human, when in a pickle, it’s always a pretty good idea to consult an adult. And they do. My favorite is the sage and seafaring pipe smoking, tattooed bear:

A ways over yonder, he told

a lumpy hat. On that island, there

may be a seashell, a beautiful

blue one. It could be underwater,

or in the tallest tree, or on the very

be hidden in a cave. I’m not dead

certain, but, if you look in the right

place, I reckon you’ll find it.

When word and image are matched seamlessly in a picture book, it sort of reminds me of a casting director in a movie that we love, picking just the exact character actor to play a pivotal part in a movie that you love. For if that piece were missing, we’d see the whole in a completely different light.

Just as in the classic Wizard of Oz, how often do our young Dorothys of the world wander far, only to realize that what they flee from, and its importance in their lives, can only be felt, dealt with, and recognized when they face it head on.

It’s nearness is closer than they may imagine.

And so it is with the three bears and their finding of the replacement blue seashell.

Confession they say is good for the soul, and owning up to what we’ve done, and the realization that our actions do have consequences beyond ourselves is a good lesson for young readers that David Soman has fashioned with both charm and clarity.

The bears’ realization that the shortest way home is to tell the truth… about who you are and what you’ve done is a fine conscience soother and learning curve for young readers…via three bruins on a quest for a blue seashell that lies on their own shore.

Home is the place where they have to take you in.

And that is always the best part of any story with a hug and forgiveness as its ending.