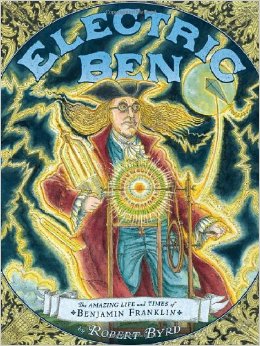 Electric Ben: The Amazing Life and Times of Benjamin Franklin

If you’ve only thought of Ben Franklin as a bespectacled white-haired colonist, flying a kite with a key attached, then you and your young reader are in for some ride.

But, I must warn you, just as the virtues espoused and exhibited by Ben included patience, you may need a bit of it as you navigate this book.

It’s lengthy and loaded with facts. But do not let its length deter you or young reader. It’s dense and compels you to delve deeper into the depths of Ben Franklin. But I can tell you that his life is presented in such a way that though it may be non-fiction, it is quite the page turner.

In his Author’s Note, Robert Byrd says to his readers:

With a figure as famous as

Franklin, there is an abundance

of information about his life. I

wasn’t going to discover any-

thing about him that wasn’t

already known, so I had to pick

and choose what I thought

was informative and visually

events in Franklin’s life in the

most intriguing, yet respectful

ment and graphic variation with

Electric Ben is packed with information on Franklin’s hunger for knowledge, and one can feel the excitement as the book delineates and describes the amazing number of hats this man wore in his rich and varied life.

Do not underestimate the worth of the word “packed”, in Robert Byrd’s extraordinary picture book feat in Electric Ben. The art alone is worth the purchase of this picture book.

But, if you have the patience to plumb its depths with your young reader, both of you will come away in awe of this man among men. Are any of his like still around? I wonder.

Robert Byrd has managed to hone from dry historical facts, a Ben Franklin from youth to old age that is real and robust; a flesh and blood person whose authenticity, far-sightedness and insatiable curiosity was very hard to sate. And thank, heavens it wasn’t. For we are the beneficiaries.

You’ll hear of the Leather Apron Men in Boston who were craftsman and:

Ben would always hold these artisans

in high regard. They worked hard and

Even from the outset, on the front and rear covers of Electric Ben, the reader will find quotes from this innovator with such a keen mind, he was not content to merely grasp  knowledge, but he had a thirst to disseminate it to others.

Perhaps, one might not think sibling rivalry  an essential topic as regards Robert Byrd’s bio on Ben, but it’s there early on…with a brother that happens to be in the same line of work, as a writer and printer.

You can just hear the howls from brother James, eldest of Josiah and Abiah Folger Franklin’s brood of fourteen children.

Ben, as the youngest, was apprenticed to his brother for nine years, at James’ paper called the New England Courant.

It provided Ben writing opportunities as a 16 year-old; some not to older brother’s liking. For he quickly developed a following all his own under the pen name, Silence Dogood.

And James was furious as Silence champions “women’s right to education and criticized everything from bad poetry to Harvard students.” A brotherly brouhaha ensues and Ben leaves with the quote:

I had already made myself

obnoxious to the governing

Sailing to Philadelphia, brother James saw to it that Ben was “banned in Boston.” And there he thrives. Writing in the Gazette, a paper owned by a friend, it gives Ben a job, but ever a striver, he soon owns the paper.

And this is just the start of a life that included inventions including the lightning rod, Franklin stove, the famous bifocals and the discovery that lightning WAS electricity.

Not satisfied, there is his political participation as one of the Founding Fathers of a new nation and someone that helped write the Declaration of Independence and a framer of the Constitution no less!

Ben was also the United States Ambassador to France with a voracious and consuming knowledge of science, music, mathematics, history and more.

This book prompted me to get a copy of Poor Richard’s Almanac, selling at that time, some 10,000 copies a year, equal to perhaps two million today!

Mr. Byrd has even reprinted a page from the 1733 copy. Here are three quotes from it:

People who are wrapped up in

If you would know the value of money

try to borrow some.

It was printed for some twenty-five years and made Ben rich, and its readers richer still… in knowledge.

I have to find a copy.

In the meantime, please read Electric Ben by Richard Byrd.