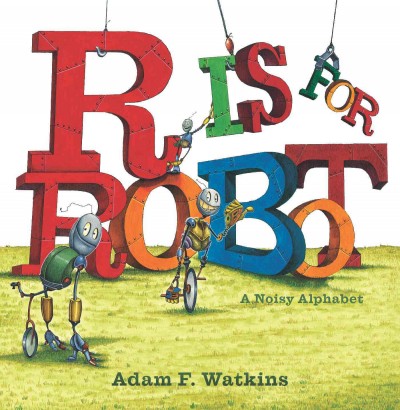 Back to School and ABCs

R is for Robots : A Noisy Alphabet

Hey picture book lovers! I’m still at the farm and we’re nearing the close of another season “living close to the land” and feeling its rhythms. As the leaves begin to turn a rusty color on the enormous chestnut tree at the front of our farm stand, I’m sure I’ll also soon see the familiar sight of yellow school buses coursing up and down Main Street in our little town of Southold, New York. It’s Back to School time just in case you haven’t noticed, patient parents. But then, I’m sure as the Labor Day weekend wound down, you were making frenetic trips to Staples, stocking up on the endless list of school supplies, and all while fitting in ONE MORE trip to the beach! Beginnings and endings are full of memories and moments we never realize ARE a memory until they’re OVER!

And speaking of beginning and endings, it led me to a perfect start off to Back to School books, namely those featuring the ALPHABET! There are some great ones out there for your young soon to be reader! Tackling those letters and becoming familiar with their shapes and the sounds they make is the FIRST STEP to the magic Open Sesame door to READING. So why not make it an adventure with books that help make the intro easy and fun?

“R is for Robots: A Noisy Alphabet” is a colorful cacophonous romp through the alphabet . According to an article written on “The History of Robots” by Paula Timpson that I read recently, robots “come in every shape, size and color.” Did you know back in 850 B.C., the poet Homer wrote about a creature called a “bot”, short for robot? Today, they can play chess, talk, paint, dance and have even gone to Mars! Why even Leonardo da Vinci sketched a mechanical knight when he was 12! Yikes! He showed that movement by humans could be copied.

Remember Robbie the Robot in the great movie, “Forbidden Planet”? And who can forget the iconic R2D2 and C-3PO of Star Wars Fame. Well, Adam Watkins has fashioned a collection of lovable robot rompers that march forward on wheels and more. As they try to harness these pesky alphabet ABC’s, Watkins’ robotic roustabouts find it is no easy task! A lot of grunting and groaning of effort ensues. They’re on a assemblage mission replete with emanating sounds that begins with the letter they’re harnessing. Cool! As a giant B is carted into place, the phrase BEEP BOOP also moves into view and C falls to the ground causing a robot to cover its ears as a deafening CLANGO CLINK CRASH echoes on the construction scene.

These cute and clamorous robots vacuum, drill, haul, cycle, tractor and cycle. And as the letter T totters into place, a large robot with a tick tock clock for a body, points to the hands as if to say, “Let’s get it going, guys!”

Don’t let your young one miss the letter S hard working senior robot that uses a walker as he gingerly helps out. The tennis balls on the bottom of his walker glide smoothly over the grass as if to say, “I may be old, but I am STILL useful. KIDS, take note!”

By the time Y and Z are put into place with a YOINK and ZAP from a Super Soaker-iike gizmo, kids will be saying, “READ IT AGAIN! and please don’t forget the sound effects, reader! It’s half the fun of making Mr. Watkins’ book make the letters A to Z clatter clearly and with cacophony, into the consciousness of the young!