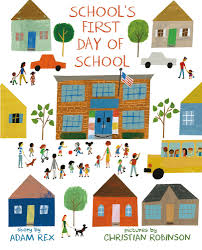 Schools have Feelings Too

How to get young ones past their own first week’s jitters of getting back to school. Here’s a tip. Get them to focus, via a prescient picture book, on something that’s just as nervous as they are; in this case, ….the school!
Do buildings have personality and feelings? I’ve often thought so. You can even sense it the minute you walk into a space.
It seems to almost breathe all the thoughts and history of everyone that’s passed through its doors.
But, what if it’s a brand spanking new school with no referential memories of what the first day of a school year is like?
School’s First Day of School perfectly captures that sensibility.
Young readers will empathize with the nuanced narrative of Adam Fox and pictures by Christian Robinson, that bring the newly erected school named Frederick Douglass Elementary, to life.
If a kindergartner has not a clue what to expect from school, it’s an interesting posit to suppose a new school is in the same position vis a vis his first day…with students.
We all want new beginnings and first starts to be a success for children. Well, Frederick Douglass Elementary wants the exact same thing!
What will it be like? Luckily for FDE, a friendly janitor is there to quell his initial fear about firsts.
FDE likes his name as soon as the last of his new floors are buffed and the windows shined in prep for the incoming students.
But, as the janitor informs him, they won’t be a duo for long…soon the students will arrive and teachers as well.

The school creaked. “Children?”
“All kinds of children. They’ll come to
play games and learn.”
“Oh,” said the school, “will you be
here?”
“You’ll see after the school day is over,”
said Janitor. Don’t worry… you’ll like
the children.”
But the school thought that janitor was
probably wrong.”

Hmm. Children… a new concept for Frederick Douglass Elementary.
Students and schools just have to see and experience “firsts” for themselves in order to realize fearful imaginings are worse than the real thing. In fact, firsts can be fun.
From the minute the big yellow school bus pulls up to the school’s front doors, students make themselves known to the school…everywhere. They drink from his water fountains, open and close classroom doors, and enjoy the jungle gyms in the schoolyard.
Everything’s great, right?
As in life, there appear the naysayers in chorus:

“This place stinks,” said one,
and the school gasped.
“I hate school,” said another
with puffy hair, to the agree-
ment of his friends.
The schools sagged a bit.

The school even sees a small freckled tyke being carried in under protest.

“I must be awful,” the school
whispered to himself.

As students sit in a circle and call out their names… Aiden (two with the same first name), Max, Bella, Emma, Chloe, and Caiden, things don’t improve as the freckled girl whispers “I don’t like school.”
And, well the school can’t help but be in a tit for tat mood:

Well…thought the school,
“maybe it doesn’t like you
either.”

It even manages to give the puffy-haired kid a squirt of water at his drinking fountain.
But, post fire drill, after some thinking, the school sort of apologizes for causing the hasty exit of students due to the ringing of its bell. He even holds his doors wide open as each re-enters with a “Sorry.”
Will lunch and a bit of learning reshape this day into a happy event for all? After all, school days, like life, are lived a day at a time. And so much can be learned in a day by both students…and the school they inhabit.
Christian Robinson’s wonderful art, also graced the pages of the Newbery Medal, Caldecott Honor Medal, and Coretta Scott King Honor winning picture book called “Last Stop on Market Street” by Matt de la Pena.
And Adam Rex’s terrific narrative has made the feelings of a school as real as the feelings of the students that enter its doors.
Kids have feelings as the clear emphasis on self esteem in school curricula clearly emphasizes today.
Well, “School’s First Day of School” will convince both you and your young reader that schools have feelings too..and should be respected.
Great message and great read.