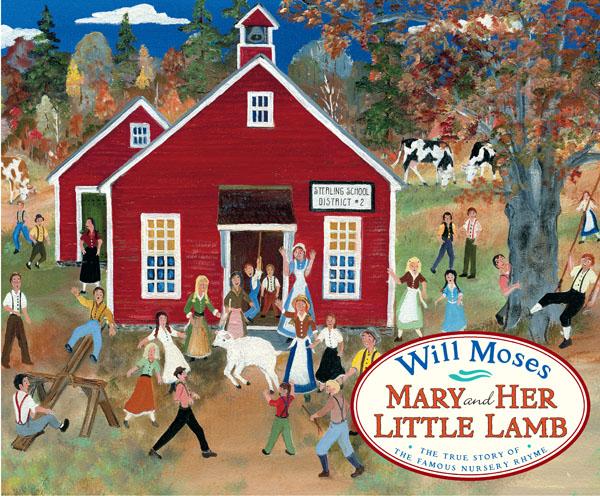 Summer’s Out, School’s In!

Mary and Her Little Lamb; The True Story of the Famous Nursery Rhyme

A new school year is about to begin, and I think this picture book fills the bill in getting your young readers in a somewhat happier mood about the end of summer, and the start of a new school year.

Who hasn’t heard the nursery rhyme story of Mary and her little lamb “that followed her to school one day?”

Artist Will Moses’ great-grandmother happens to be none other than the famous painter of folk art called “Grandma Moses,” and whose true name is Anna Mary Robertson Moses.

Will Moses developed his own continuation of a traditional folk art style at the age of four, when a paint brush was first put into his hand. His work has been shown at such prestigious settings as The Smithsonian and the White House.

And here’s a tidbit that will encourage parents and grandparents to develop the philosophy that “it’s never too late to learn.”

Grandma Moses began her painting career at the venerable age of 78!

But back to Mary and her little lamb. If you believed, as I did, that the beloved nursery poem was merely that; a lovely Mother Goose rhyme, then both you and your young reader are in for a lovely surprise.

There really was a Mary named Mary Elizabeth Sawyer, and she did have a little lamb. Mary’s school, where her immortalized pet lamb followed her, was then located at the present site of the famous Wayside Inn in Sudbury, Massachusetts.

The origins of the poem came from a story written by Mary herself in later life and became part of a pamphlet. The rest is history.

Young readers will enjoy the tale of Mary’s tending of the small and sick lamb from its birth, and her cajoling of her mother to allow it to be nursed back to health… in their house. The young Mary bottle feeds the small lamb and it not only survives, but their closeness is cemented.

Will Moses’ folk art paintings beautifully capture the freedom and freshness of Mary’s surroundings, as she and her lamb wander and wonder at the landscape which surrounds them that Moses paints to pastoral perfection.

Ah, but the first day of school involves predictable separation for Mary and her lamb. And with an… “I’ll see you when school lets out”, Mary is off over stone walls and bridges to her schoolhouse.

And so is the lamb.

It’s not content to merely gaze at Mary through the schoolhouse door, but gamely trots in and makes itself to home under Mary’s seat.

Covered by a quilt that Mary quickly tosses over the lamb to conceal it, all seems well, until Mary is called to the front of the room to recite. Will Mary’s lamb follow her? Guess who the teacher, Miss Kimball, and the class, see gamboling right up there, too – Mary’s little lamb, of course.

A visitor to the scene that day, a Mr. Roulstone, is so amused at the event that he returns the next day, asking Mary to read to the class what he had written from the previous day’s events. And it said…

Mary had a little lamb,

Its fleece was white as snow,

And everywhere that Mary went

The lamb was sure to go;

He followed her to school one day

That was against the rule,

It made the children laugh and play,

To see a lamb at school.

In 1830, a writer and editor named Sarah Josepha Hale published it, and apparently added even more stanzas. And it was even set to music.

“Mary’s Little Lamb” is now a small animal who has earned its “chops” for all of childhood to hear and recite by heart.

Please let your young readers hear “the rest of the story” of the nursery rhyme of Mary and her delightfully devoted fleecy  white lamb who longed to live…and learn, right alongside her longtime companion.

Kids will love it; and the reader of this picture book by Will Moses may just get a kick out of it as well.

If you want your young reader to learn a simple version of “Mary Had a Little Lamb” on the piano, here’s a link to a simple  tutorial to teach them how. Then you can both sing along while they play.